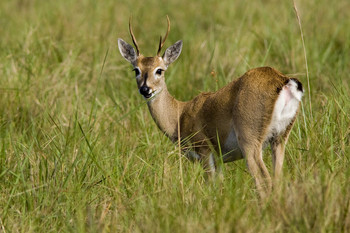 The Barba Azul Nature Reserve in Bolivia’s Beni savanna will form part of a new Ramsar site, the largest ever designated.

To mark the 2013 World Wetlands Day, the Ramsar Convention on Wetlands of International Importance has named a new 6.9 million hectare Ramsar site, the Llanos de Moxos in the south west corner of the Amazon basin.

“It is an important step for conservation that the importance of the Llanos de Moxos region has been given international recognition. It is a poorly studied area that holds important and threatened endemic species that need to be protected,” Bennett told World Land Trust (WLT).

“But,” he adds, “it is important to note that the Ramsar designation is just a step. We urgently need ongoing conservation efforts on the ground to forever protect the most threatened sites.”

WLT has has been supporting Asociación Armonía’s conservation efforts in the Barba Azul Nature Reserve in the Llanos de Moxos region since 2008.

“The Ramsar designation is just a step. We urgently need ongoing conservation efforts on the ground to forever protect the most threatened sites.”
(Bennett Hennessey, Executive Director, Asociación Armonía)

The Llanos de Moxos (known as the Beni Pampas grasslands in Bolivia) is a vast area of seasonally flooded savanna, predominantly found in the Beni region of Bolivia and spreading into isolated areas in Peru and Brazil. The wetlands are important for their rich natural diversity, protecting an array of rare and threatened species.

The majority of land within the Llanos de Moxos belongs to private cattle ranchers, who continue to overgraze the grasslands, burn the wild grasses on an annual basis and plant exotic African grasses. Unfortunately the Ramsar convention will have no teeth to stop the cattle ranchers’ need to increase profit.

Buy an Acre in Bolivia

WLT has been supporting further land purchase to add to the Barba Azul Nature Reserve in Bolivia’s Beni savanna since the beginning of 2013.

“With more research, the Beni tropical savannas will prove to have other threatened species.”
(Bennett Hennessey, Executive Director, Asociación Armonía)

This new Buy an Acre project is extremely important, not just because Barba Azul is the world’s only breeding ground for the Blue-throated Macaw, but also because the reserve harbours a number of other threatened, near threatened or vulnerable species such as Pampas Deer (threatened), Jaguar and Maned Wolf (near threatened) and Giant Anteater (vulnerable).

According to Bennett, local experts know of three birds that have Beni adapted variation, which suggests that they are Beni endemic species. He told WLT: “With more research, the Beni tropical savannas will prove to have other threatened species.”