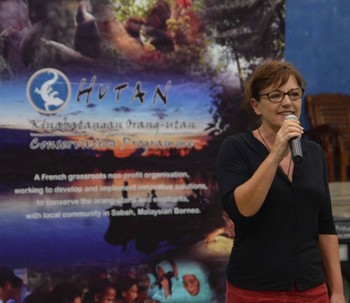 Against a backdrop of escalating human-elephant conflict in Malaysian Borneo, World Land Trust’s Malaysian partner HUTAN is pressing on with plans to secure a vitally important wildlife corridor.

While World Land Trust (WLT) are raising funds for land purchase in Sabah, HUTAN staff are approaching landowners in the Kinabatangan River corridor with a view to negotiating agreements of sale.

“It was very encouraging to hear all the staff presenting their respective work with great professionalism and passion,” Isabelle told WLT after the meeting. “All these different studies, conservation efforts and education programmes seem to fall in place perfectly, all supporting each other towards the same goal of protecting Kinabatangan’s forests and wildlife.”

Founded in 1996, HUTAN started life as a small research organisation set up to investigate reasons for the decline in Orang-utan populations.

Since then HUTAN has gathered a wealth of data on how Orang-utans and other species cope with habitat degradation and fragmentation. HUTAN has shared this knowledge with stakeholders and decision-makers, which has prompted the state government and others significantly to step up efforts to preserve these species.

HUTAN’s work over the past 15 years with members of the Kinabatangan community has demonstrated that sustainable local development is compatible with long term wildlife and habitat conservation. As a result of HUTAN’s initiatives local people have become more involved with wildlife conservation.

WLT has been supporting HUTAN’s work since 2008.

Looking ahead, Isabelle describes HUTAN’s plans for the future: “HUTAN will continuously strive to improve the conservation status of the Orang-utan, elephant and other endangered wildlife species in Sabah.

“We will particularly focus on restoring the resilience of forest ecosystems that have been degraded, fragmented or polluted, while also working to preserve wildlife populations and provide services which are of benefit to human society.

“Pioneering solutions are needed to enhance the connectivity between isolated wildlife habitat fragments. With support from World Land Trust’s Borneo Rainforest Appeal we shall work to ensure the long-term conservation of Sabah’s unique biodiversity and to restore more harmonious relationships between people and wildlife sharing the same ecosystems.”

In January we reported the deaths of 10 Bornean Pygmy Elephants in a forest reserve of Sabah. A few days after the news hit international headlines, four more elephants were found dead.

Tests have been carried out in Sabah to establish the cause of death, but so far test results have proved inconclusive. Samples have now been sent to Thailand and Australia for further analysis.

“We urgently need to purchase land to create wildlife corridors through which wildlife can roam freely without coming into conflict with villagers.”
(Mary Tibbett, WLT’s Conservation Programmes Officer, Asia and Africa Regions)

Initial investigations suggest that the most likely cause of death was poisoning although it is still unclear whether or not the elephants were killed intentionally.

Mary Tibbett, WLT’s Conservation Programmes Officer (Asia and Africa Regions), explains why wildlife corridors are so necessary: “Whether intentional or not, the elephant deaths indicate that human-elephant conflict in the area is escalating. This makes it all the more urgent that we purchase land to create wildlife corridors through which elephants, Orang-utans and other endangered species can roam freely without coming into conflict with local villagers.”

WLT has a Special Appeal to raise funds to save vital areas of forest to provide safe havens for Orang-utans, elephants and other threatened wildlife. If we are able to raise £1 million we can save most of the forested land currently available in the area we are focusing on in the Lower Kinabatangan floodplain.

Donate to the Borneo Rainforest Appeal »