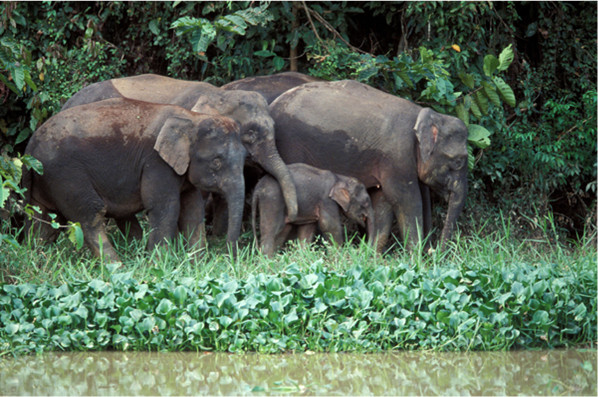 World Land Trust and its partners in Borneo were saddened to learn from Malaysian wildlife officials yesterday that ten Endangered Bornean Pygmy Elephants had been found dead in a forest reserve in Sabah, NE Borneo. Initial investigations have concluded that the most likely cause of death was poisoning although it is still unclear whether or not the elephants were killed intentionally.

WLT is working with project partner HUTAN in Malaysian Borneo to protect some of the last remaining tropical forests for critically threatened species, particularly Orang-utans and Pygmy Elephants.

The Pygmy Elephant is a sub-species of the Asian elephant confined to Borneo. Its wild population has rapidly declined due to the destruction of the rainforests for oil palm plantations. Only 1,500 Pygmy Elephants now survive in the forests of eastern Sabah, Malaysian Borneo, so saving the remaining population is vital.

“The issue at the heart of Human–Elephant conflict is simply one of space. Although called “pygmy” elephants, these are large animals which often move around in herds of up to a hundred. As lands between protected areas are cleared, the herds are left with no other option than to walk through them to reach the next forest. Inevitably, they cause huge amounts of damage leading to people retaliating,” Mary said today.

Retaliation against Borneo’s elephants has been widely reported in the press with stories of elephants being shot at and prevented from following their natural migrations by installation of electric fences and steep-sided drainage channels illegally dug by plantation owners. However, to date there have been no reports of elephant poisoning in Sabah and the loss of such a large number is certainly a blow to conservation of the species.

WLT’s Borneo programme aims to reduce human – elephant conflict in the Lower Kinabatangan region of Sabah.  WLT and partners HUTAN and LEAP Spiral have already saved a 222 acre “elephant corridor” that will permanently safeguard an important crossing on the Kinabatangan River. This area was threatened with deforestation until donors to WLT’s first Borneo Appeal enabled the WLT’s partners to buy the land for conservation instead.

In addition to protecting forest habitat, HUTAN runs an Elephant Conservation Unit whose specific mission is to create a more harmonious relationship between elephants and the local community. Despite these initiatives, more protected areas are still needed.

WLT’s latest Borneo Rainforest Appeal aims to protect a critically important wildlife corridor between protected areas in the Kinabatangan. Palm plantations and tourism developments threaten this land, which is needed  to form a safe corridor for wildlife.

Last October, Bill Oddie and Simon Barnes from The Times, visited the area under the auspices of the WLT. Simon later reported on the initiative in The Times writing:

“It’s about connectivity. Problem one is that a lot of forest has been destroyed; problem two is that the bits of protected forest that are left are not joined up. We have islands, and a forest island is not viable in the long term […] Only reconnect. That’s the answer. Only reconnect these remnant forest patches: join up the dots and allow populations of orang-utans to pass through, and with them Borneo’s charming pygmy elephants, the extraordinary proboscis monkeys, endemic to Borneo, and the slow loris. What’s good for orang-utans is good for all forest creatures.”

World Land Trust’s Borneo Rainforest Appeal is raising vital funds to protect more elephant habitat in this region through our local partner HUTAN. You can help protect forest for elephants and Orang-utans by donating to WLT.