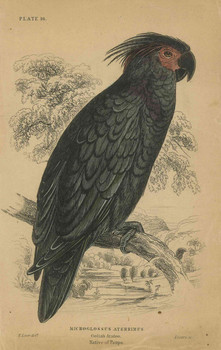 Edward Lear is the subject of a new exhibition at World Land Trust (WLT) gallery in Halesworth.

Edward Lear is known to many people as a creator of limericks and nonsense verses, and the author of The Owl and the Pussycat. But in his lifetime, Lear was best known as an artist, first as an illustrator of wildlife and later as a landscape painter.

A new exhibition at World Land Trust (WLT) gallery tells the story of Lear with a display of Lear’s prints from the private collection of John Burton, WLT Chief Executive.

A golden age of wildlife illustrators

Almost entirely self-taught, Lear showed masterly technique, and pioneered the use of lithographic reproduction, a ground breaking development which remained the benchmark for this art form until the advent of photography.

In a golden age of wildlife illustrators, which included John James Audubon, John Gould, Sir William Jardine, Prideaux Selby and William Swainson, Lear can be singled out for his acute observation and technical skill, but most particularly for his remarkable flair in bringing his subjects to life.

Among the prints on display in the exhibition are engravings produced by Lear for Jardine’s Naturalists’ Library in the early 19th century.

These little engravings lack the grandeur of the folio-sized lithographs, but they have great charm and are becoming increasingly popular now that larger works are beyond the reach of many collectors of bird art.

While a Lear lithograph of a parrot can sell for up to £5,000, smaller prints such as those on display at World Land Trust (WLT) gallery are modestly priced between £40 and £500.

Each of the framed prints in the exhibition is an original, being hand coloured.

Also included in the exhibition is a selection of prints by Lear’s contemporaries, John and Elizabeth Gould, Joseph Smit and J Stewart.

A poet as well as an artist, Lear produced some of the greatest nonsense poems in the English language. In addition to composing narrative poems such as the Owl and the Pussy Cat, and the Dong with a Luminous Nose, Edward Lear was equally adept at the short format limerick.

There was an Old Man with a beard,
Who said, ‘It is just as I feared! –
Two Owls and a Hen,
Four Larks and a Wren,
Have all built their nests in my beard.’
(Edward Lear)

To mark the exhibition of Edward Lear prints in WLT gallery, World Land Trust is launching a limerick competition.

Limericks submitted must broadly reflect the history, mission and activities of World Land Trust. The winner will have a chance to meet television presenter and Britain’s best loved bird watcher Bill Oddie.

Limericks can be submitted via WLT’s website or facebook page, by email, by post or in person at the gallery. For more information about the competition and for a copy of the entry rules visit the limerick competition event page.