Saving the Beni savanna ecoregion of northern Bolivia is a priority for World Land Trust’s (WLT) Buy an Acre fund in 2013.

WLT is assisting Bolivian conservation organisation Asociación Armonía to purchase a 15,711 acre (6,358 hectare) ranch. The land is adjacent to the existing Barba Azul nature reserve, which is named after the critically endangered Blue-throated Macaw.

The land purchase is important because the Beni savanna is home to an extraordinary range of flora, fauna and endangered species.

“By extending the protected savanna, the Barba Azul reserve can provide more habitat for threatened species such as the Jaguar, Puma, and Maned Wolf as well as the Blue-throated Macaw.”

Bennett Hennessey, executive director of Asociación Armonía, is delighted that WLT will be raising funds for Bolivia in 2013. “It is great to know that WLT will make the Beni Savanna a priority for 2013. By extending the protected savanna, the Barba Azul reserve can provide more habitat for threatened species such as the Jaguar, Puma, and Maned Wolf as well as the Blue-throated Macaw.”

Land can still be purchased relatively cheaply in Bolivia and although this region has undergone hundreds of years of logging and ranching as well as burning and planting with exotic grasses, it is still a relatively unspoiled area of high biodiversity. But mechanised farming creeps ever nearer, and as the demand for biofuel crops looms, it is only a matter of time before the region becomes a honey pot for speculators. Little of it is protected at present and for this reason WLT is keen to prioritise Buy an Acre funding in 2013 for a substantial land purchase, rather than delay and watch land prices soar. 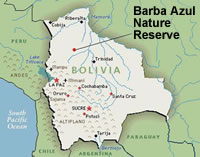 There are thought to be fewer than 350 Blue-throated Macaws surviving in the wild and they depend on the Motacu palm (Attalea phalerata), which grows in the forest islands of the Beni savanna, for food and nesting cavities.

In 2010 Armonía extended the reserve by acquiring a second ranch, also with help from WLT-US and ABC. Today the Barba Azul reserve, which includes the river between the ranches, covers 11,555 acres (4,676 hectares).

WLT’s Bolivian land purchase in 2013 will be made in association with WLT-US, ABC and IUCN-Netherlands. The Loro Parque Fundación is also providing logistical support.

The focus for other land purchases in 2013 from WLT’s Buy an Acre fund are in Colombia, Ecuador, and Mexico. Donations to Buy an Acre help create permanently protected nature reserves.

Read more about the Beni savanna project in Bolivia