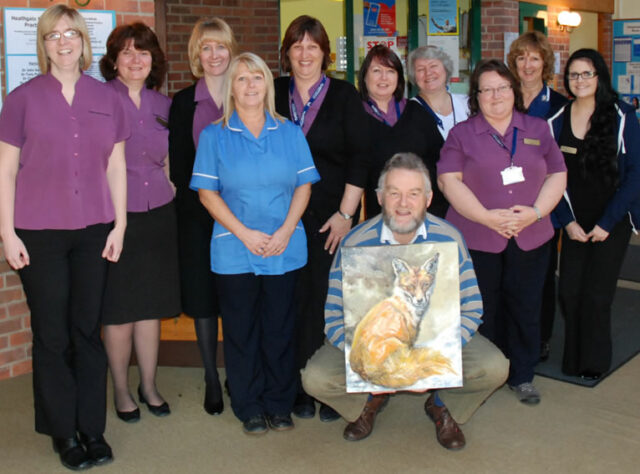 Buying a painting from World Land Trust’s gallery in Halesworth is a simple but effective way to support the work of the Trust. And that is exactly what Norfolk doctor John Sampson did to mark his retirement this month.

After 30 years as a family doctor at Heathgate medical practice in Poringland, Norfolk, Dr Sampson is stepping down at Christmas. When patients offered him a retirement present, John decided to use the gift to buy a painting he admired as well as to raise funds for nature conservation charity World Land Trust (WLT).

He explains why he chose Ania Hobson’s Winter Fox: “The picture reminds me of the staff at the surgery: sharp eyes, ears and nose to sniff out our patients’ concerns and needs. The eyes remind me of the head round my door when I have 101 things to do – ‘Can you just fit in another patient?’ – often with the bribe of a cup of tea! In many ways the World Land Trust is caring at an international level while I have been caring at a local level. I look forward to being more engaged with the work of the Trust in my retirement.”

World Land Trust are delighted that John chose to mark his retirement in this way and wish him much happiness in the future.

The picture was presented to John by his patients at his retirement party on Friday 7 December.