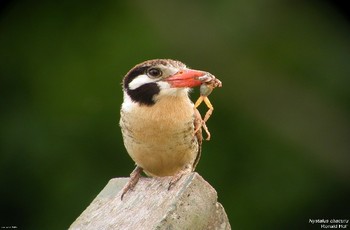 Guyra marked the anniversary with a special publication which included testimonials from international experts including WLT patron Sir David Attenborough.

“I have always loved Paraguay since I went there to film Zoo Quest for the BBC more than 50 years ago,” said Sir David Attenborough. “It is one of the world’s last great wild places and it is particularly encouraging that a large part of it is how it was when I was there half a century ago. Congratulations to Guyra Paraguay in its efforts to protect the marvellous biodiversity of their country.”

WLT has worked in partnership with Guyra since 2004, and joins the rest of the international conservation community in sending congratulations.

The word Guyra means ‘bird’ in the language of the indigenous Guaraní people of Paraguay, and in 1997 Guyra’s founding mission was to conserve endangered birds by identifying and protecting the most important bird habitats.

Guyra started small. In its first year, the organisation had a budget of just $5,000, but lack of funds did not hold it back. With the support of the RSPB in Britain, a strategic plan was drawn up, and from that point on the Guyra team set about carrying out bird surveys and mapping, important work that was to lay the foundations for the country’s Biodiversity Database.

In the course of 15 years since then, the Guyra team (including students and volunteers) has surveyed more than 500 different sites and made 150,000 recordings of 1,600 species of vertebrates. Today Paraguay has 57 Important Bird Areas (IBAs), a testament to Guyra’s great success.

One of Guyra’s greatest feats is the preservation of San Rafael, the last remnant of Atlantic rainforest in Paraguay. Over a ten year period from 2002, acre by acre, Guyra has saved 17,393 acres (7,039 ha) of rainforest in the Guyra Reta Reserve.

This painstaking work in San Rafael involves careful consultation with key stakeholders: only two months ago another 677 acres (274 ha) were purchased, which will protect the ancestral territory of the Mbyá People. WLT (with particular support from corporate supporter Ocean) provided funding together with the Jensen Foundation through the Forest of Hope programme of BirdLife International, and World Land Trust-US.

Alberto Yanosky has been Executive Director of Guyra Paraguay since 2001 and has helped steer the development of the organisation: “Over the past 15 years, Guyra Paraguay’s mission has evolved,” he explains. “Today Guyra focuses on the entire biodiversity of Paraguay, and not just on its birds. And, with the support of partners such as World Land Trust, we have gone international with projects beyond Paraguay’s political boundaries.”

“Today Guyra focuses on the entire biodiversity of Paraguay, and not just on its birds. And, with the support of partners such as World Land Trust, we have gone international with projects beyond Paraguay’s political boundaries.“

WLT is also supporting Guyra’s work in the Dry Chaco through Keepers of the Wild.

Guyra Paraguay was founded at a meeting in Asunción on 20 November 1997.