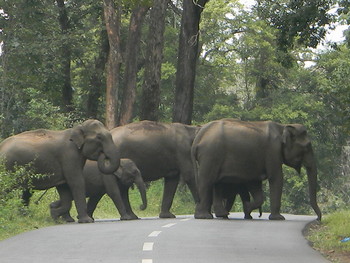 World Land Trust supporter Jessica McConnell went on a life-changing trip to the Tirunelli-Kudrakote elephant corridor in Kerala, southern India. She visited Cheakady, a new village built to rehome a community previously living within a traditional elephant migration route and, most important of all, she saw elephants. Here she describes her reactions

“When you live in the suburbs like I do, it’s hard to comprehend the threat of an elephant walking through your home. But if your house is on the migration path of elephants, you live with the daily threat of destruction. The simplest things, like walking to school or to bus stops, are hazardous.

On the edge of the sites of former villages within the corridors, there are platforms in the trees. Before World Land Trust (WLT) helped to relocate the villagers away from conflict, every night a member of the community would keep guard on the platform. If he heard anything he would make loud noises and set off fire crackers to scare animals away and to alert the villagers to potential danger. The threat of wild animals was with them, day and night.

WLT’s partner in India is the Wildlife Trust of India (WTI). The Tirunelli-Kudrakote elephant corridor in Kerala is 6km by approximately 1.5km and is a vital protected link to the Tirunelli and Kudrakote Reserve Forests where elephants can roam safely. The people previously living in four villages, where lives and livelihoods were at risk from elephants, approached WTI asking to be relocated to safe areas outside the path of elephants. This gave WTI the opportunity to save a critically important habitat for herds of elephants.

In the elephant corridor the whole area is teeming with wildlife, and people and animals live in close proximity; there is no divide, no protection.

I was able to see first-hand clear signs of elephant activity in areas where homes once stood. Although not an easy decision for people who had established homes, relocation is a solution to human-elephant conflict.

The new villages are amazing, and when you walk through one it’s clear it’s a fully functioning community. You can tell that the people are doing well.

Thinking back to what their lives were like before the move and the constant threat of elephant damage, they are clearly much better off.  Mostly their income is through growing fruit, vegetables, grains and nuts in their gardens and they are able to be far more productive now so there is a huge difference in income, for a start.

You could just tell they are happy. Children can go to school safely, they have medical care and most important of all, they do not have the daily dread of elephants.

After families have been relocated, the old village is removed; there are no bricks or traces of any structure left. And when you see how ‘the jungle’ has taken over where the villages once stood and to see how quickly the forest recovers is remarkable.

We went for a drive in a reserve where we were ‘guaranteed’ to see elephants. Did we? We saw Indian wild dogs (dhole, an endangered species) and a giant squirrel, but no elephants.

But then later, I was on a bus and an elephant appeared in the road. It was just outside the bus window. It was huge. Clearly the others on the bus were used to the spectacle, but for me it was amazing. I tried to get as close to the window as I could.

I surprised myself with how I reacted to seeing an elephant in the wild for the first time.  And I know I surprised all of the locals on the bus. Everyone had a good laugh.

I love wildlife and conservation, but I have spent most of my life in cities and I’ve never seen what it’s like in the wild.

Every month I make my donation to WLT among other conservation charities and after years of imagining it, I finally got to see the real thing.

I came away thinking, you know what? My life’s not stressful at all. How could I have thought it was? A trip like that puts into perspective what it takes to survive. Walk to the store? There is no store!

“The Tirunelli-Kudrakote elephant corridor is a resounding confirmation of the life-changing work undertaken by World Land Trust.”

What are the threats here, where I live? You might be run over, but you can look both ways before you cross the road. The threat for them? A stampeding elephant, or even being attacked by a tiger. Now that’s not a risk I can comprehend.

We take so much for granted, and you only realise it when you get a glimpse into other people’s lives.

I am so grateful to have seen a project that was not only thrilling but also emotional and inspiring. The Tirunelli-Kudrakote elephant corridor is a resounding confirmation of the life-changing work undertaken by World Land Trust.”

Jessica McConnell is a director of Beyond Carbon, an organisation which forges unique third party relationships, helping to protect threatened ecosystems and vulnerable communities. Jose Louies and Ramith Meledath from the Wildlife Trust of India (WTI) accompanied Jessica on her visit.