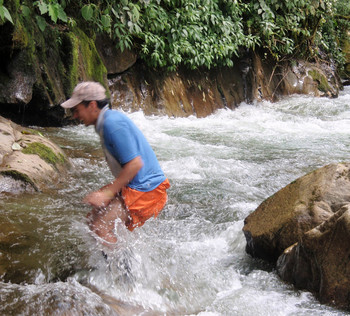 For the second year running World Land Trust (WLT)  took part in the Big Give Christmas Challenge – and it was no less nail-biting this year than it was in 2011.  Would the Big Give website work better this year? Would the matched funds hold out? Would our supporters give generously?

This year we put our Big Give Christmas Challenge efforts into raising funds for Keepers of the Wild – rangers who help our overseas project partners protect the reserves against illegal hunting and logging, monitor wildlife, keep trails open for visitors and carry out a hundred and one other vital tasks.

In the run up we worked hard to galvanise activity and donations ready for the start of the three day online Challenge which began on 6 December.

The 2011 experience had been very frustrating as the Big Give website crashed shortly after 10am on the first day and did not function for the rest of the day. The site continued to experience glitches and it was even more frustrating for donors poised to make donations only to find that they couldn’t get on the website or that matched funds weren’t available.

Last year we spent time explaining to would-be supporters that it wasn’t WLT’s fault and there was absolutely nothing we could do except apologise on behalf of the Big Give.

But despite all the setbacks and frustrations we did manage to raise over £134,000 for Buy an Acre projects and although we did not reach our target of £200,000 it was a wonderful sum to raise which went to saving acres in Colombia, Ecuador and Mexico.

So the question earlier this year was ‘Do we do the Big Give or don’t we?’ Feelings in the office were divided but the fact that the Big Give promised a more robust website and that it was, after all, an opportunity for us to channel substantial fundraising efforts into just three days, we decided to give it another go.

In 2012 we set our sights a little lower, aiming to raise a total of £120,000 to help fund Keepers of the Wild for two years. We raised the £30,000  in matched fund pledges in advance, promoted our participation in the Big Give as widely as possible, sent out email reminders and did all we could to attract support; then we began biting our nails as we got closer and closer to the 10am start on 6 December.

We breathed a huge sigh of relief when, at 10am, the site opened for business and operated well.

Then disappointment set in as we realised that matched funds had run out by 10.40am. The site suggested to donors that they made their donation at 10am the following morning to access the matched funds pot. Many did do this and donated successfully but then again, and on the final day, the matched funds simply ran out within an hour. ‘Why is this?’ we are being asked. The answer is we don’t know but are trying to find out.

By the end of the Big Give three day challenge WLT had  raised a total of £89,000 in a combination of online donations, WLT matched funds and Big Give matched funds. Unfortunately, we did not reach our target but we were very happy to raise this significant sum to help fund Keepers of the Wild and for this we are hugely grateful to everyone who made the effort to donate.

Also, this isn’t quite the end of the story. Many people contacted us saying they don’t have computers but still wished to support the Big Give, sending donations by post and over the phone. This brought our actual total to well over £90,000 and we have just heard that another generous supporter has agreed to ‘top up’ the Keepers of the Wild fund which brings us to over the £120,000 target we set ourselves.

This is a fantastic result that will enable us to keep rangers in the reserves, protecting the land that has been saved. Very many thanks again to everyone who donated to this year’s Big Give Christmas Challenge.

Please let us have your comments. Did you find making a donation online during the Big Give Christmas Challenge to be successful and satisfying? Did you experience any frustrations? If so what were they? Do you think that WLT should take part again 2013?

Keepers of the Wild videos: