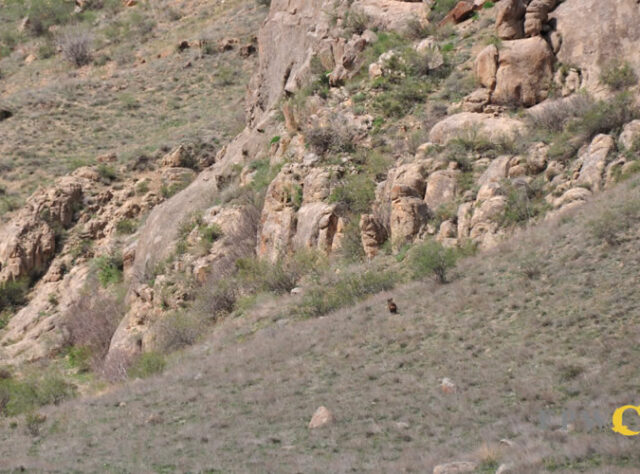 While volunteering in the Caucasus Wildlife Refuge, Afra Hoeck was lucky enough to see a bear cub taking flight. Though the animal vanished very quickly, she managed to take a photo; it seemed as though the small bear was alone and after analysing the picture ranger Manuk Manukyan, who is support by WLT’s Keepers of the Wild programme, came to the conclusion that the bear was born last year.

To his surprise the animal had survived the winter; young bears that are not protected by their mother are easy prey of wolves. Manuk said: “Hopefully the animal will stay in the area of the Caucasus Wildlife Refuge, as it is much safer than other areas and provides enough food.”

WLT is helping to protect threatened animals in the Caucasus Wildlife Refuge by funding rangers through the Keepers of the Wild programme who are tackling illegal hunting in the region. WLT has also launched a Special Appeal to save the Caucasian Leopard, by increasing land protection while also helping to fund research and monitoring of the subspecies in the wild.

In the meantime, the team of rangers are working to improve this habitat for wildlife. They have already planted 2,000 native trees this year chosen specially to benefit the animals that are found in the region; such as Wild Apricot which will attract the Armenian Mouflon, a wild sheep endemic to Armenia that is subjected to trophy hunting outside the Caucasus Wildlife Refuge. The refuge was once covered by shrubs and trees but in the nineties when Armenia suffered from a severe energy crisis all trees in the area were logged by the villagers for heating.

In order to water the trees, the rangers have been setting up a drip irrigation system in the three hectare area in front of their station. The water, which is pumped up from the river flowing through the valley just beneath the station, will water the 2,000 trees in the most efficient manner during the driest months of the year.