Every acre counts: nearly 1,500 saved in one month in Paraguay, Ecuador and Mexico..

677 acres of Atlantic Rainforest saved in Paraguay but threats continue

San Rafael still protects one of the last great stands of Atlantic Rainforest in Paraguay and Guyra Paraguay are working tirelessly to protect it. October 8 marked another milestone in the reserve’s history when a further 677 acres (274 ha) was purchased. It protects the ancestral territory of the Mbyá People and will be co-owned with them for the next ten years. World Land Trust (with particular support from Ocean Group) provided funding together with the Jensen Foundation through the “Forest of Hope” programme of BirdLife International, and World Land Trust-US.

San Rafael is under immense pressure from illegal logging operations and Guyra staff and rangers are regularly intimidated and threatened. On 15 October one of the houses which form part of the Kangüery administration centre of the Guyra Reta reserve was burned to the ground, luckily no-one was harmed. This criminal act is being taken very seriously and Guyra Paraguay are requesting an immediate investigation into illegal logging and trafficking, and also requesting increased protection for their staff. 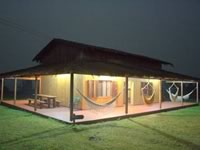 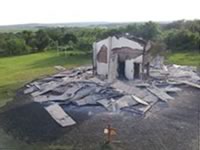 A building forming part of the Kangüery Biological Station in San Rafael, burned to the ground in October. Presumed to be an act of intimidation by a group of illegal loggers.