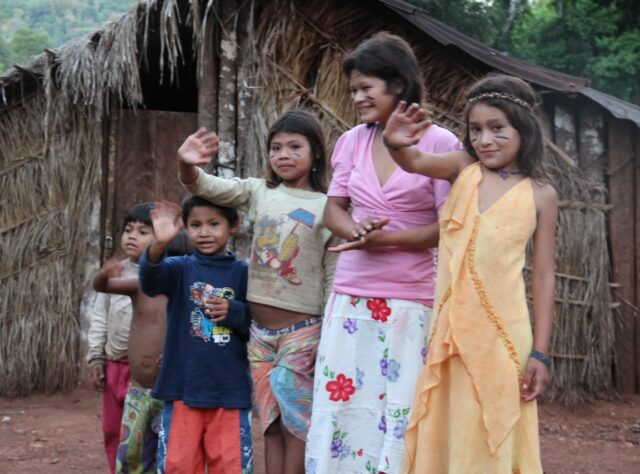 Support of local people is central to every conservation project that the World Land Trust (WLT) funds.

Our partners across the world always employ local people to manage or carry out their conservation activities, while actively involving the surrounding communities where ever possible.

Creating employment is often the most practical way of benefiting local people in areas where there are high levels of unemployment — such as rural Ecuador or Brazil. Our partners always employ local people as reserve rangers and WLT helps support this through the Keepers of the Wild programme, which is funding the salary 15 reserve ranges in eight different countries

However, sometimes working alongside local communities isn’t so easy; the Gran Chaco in Paraguay is one of those few places left in the world where there are still isolated, uncontacted groups of people. It is estimated that 100-150 indigenes live in the Gran Chaco, who shun contact and have ways of clearly indicating that they wish to continue to live in isolation. In 1998, some intruders did get too close and were greeted with a warning shower of arrows.

WLT and its partner Guyra Paraguay believe it is critically important to respect these wishes and protect the isolated groups as far as it is possible from unwanted intrusion. The problem is that rampant deforestation, missionary activities, oil exploration and other activities all put these groups under pressure.

Further complicating the issue is the fact that the indigenous groups need huge areas over which to hunt and most of these lands are either designated as National Parks or are privately owned.

The land purchases in Paraguay to create more protected areas, funded by the WLT and our partners IUCN Netherlands, were made on the understanding that the rights of indigenous peoples would be fully respected. But in order for indigenous groups to maintain any semblance of their traditional lifestyles, we need to continue ensuring that large areas are protected from destruction.

By working with all the agencies involved we believe it is possible for wildlife and even the isolated groups to continue to live undisturbed for a few more years. In collaboration with Guyra Paraguay and the government, WLT is already protecting over two and half million acres. But we must do more to fully protect the integrity of the National Parks and to acquire additional lands to create wildlife corridors – these are relatively small parcels of land that connect one protected area to another.

We must ensure that in the face of the region’s alarming deforestation rates that large areas of biodiverse habitats are protected, while at the same time acknowledging and fully respecting the fact that indigenous groups have legally recognised claims to much of this land.

All this costs money. But to be fair, relatively little money. Some of our wealthier supporters have realised that a donation of £50,000 or £100,000 can have a massive impact in this region. It can buy a huge chunk of forest and put in place real protection. The relevant government agencies and others are fully behind these initiatives, but simply do not have the financial resources themselves — there is far too much pressure from other interest groups.

A few strategically located corridors will enable not only the wildlife, but also the indigenous human hunters and gatherers to move freely between the existing protected areas.

Find out more about WLT’s conservation project Defending the Chaco »