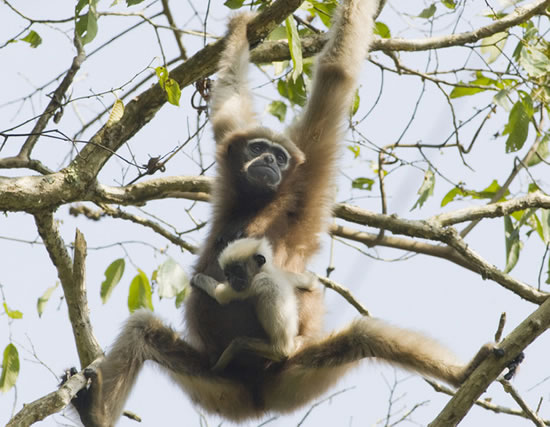 I’ve been a supporter of WLT for more years than I’d really like to think about. I love their straightforward can-do approach to conservation. So when I was looking for positive conservation stories to write about for my 8-12 year old readers I knew WLT would help. So just before Christmas last year I found myself in Meghalaya in North West India, where WLT and Wildlife Trust of India (WTI) are helping local people protect their forests and the populations of Hoolock Gibbons and wild Indian elephants they contain…

Even in a drizzle very reminiscent of my home in Wales, the village of Selbagre in the Garo Hills seemed like a version of Eden. The beautiful little houses, made of bamboo, woven palm and bark, were arranged in perfect harmony with each other and with their surrounding crops and forest.  Birds called in the tree tops like miniature church bells chiming and washing hung in neat lines under the protective overhang of the thatched roofs.

It was a sleepy, wet Sunday morning, warm and soft. Ever welcoming Garo villagers smiled from their doorways, as Rebecca from WLT and I were guided up the track by Sunil from WTI and local forest officer Rangku. We were in search of gibbons, although I didn’t really understand why the middle of a village, no matter how Eden like was a good place to look.

Villagers smiled and pointed in response to Rangku’s gentle greetings, and gradually the penny dropped: everyone in the village knew where the gibbons were. It was as if they were visiting relatives, of whom the villagers were particularly proud.

“The gibbons like to be close to a village”, Rangku explained, “they feel safe. And the villagers believe that it’s a bad sign if the gibbons stop calling or go away.”

Just 50 metres from the last house, we found them: a family, just like the human families we had just met, sitting out the rainy day, high in a banyan tree. There was a pale grey mum and her tiny baby clutched to her tummy, her husband a few branches away and their two adolescent sons, hunched grumpily like a pair of clotted spiders. They moved briefly against the dot matrix of the leafy canopy and we caught glimpses of trademark gibbon brachiation. But mostly they sat curled against the weather, occasionally shaking the dampness from their coats.

I had always imagined seeing gibbons for the first time in some remote place, hearing them singing in a sunlit dawn. But this encounter on a rainy day, at the edge of a village was more meaningful than that fantasy, because gibbons and humans had chosen to live as neighbours.

Over the short, but wonderful, time I spent in the Garo hills that choice came to symbolise for me the other choices that the Garo villagers are making. They are choosing to keep their forests, by reducing their reliance on ‘jhumming’, or slash and burn cultivation, and by reforesting old jhum plots to form continuously forested corridors through which elephants and other wildlife can move safely.

Selbagre, and Sasat Sakuladuma like many other villages, now have tree nurseries and villagers are involved in planting and caring for new plots of forest. With the support of WLT’s partners in the Garo Hills, WTI, villagers can earn money by planting and caring for trees. But their enthusiasm for trees runs deeper than economic necessity: Sunil told me, “The young people say that they want to keep the forest because it is their identity.”

That identity is crucial to the other important choice that the Garo people are making: to cherish their tightly knit communities, and their communal decision making processes. It is the strength of Garo communities that underpins their ability to protect their forests and the wildlife that they shelter.

For the Garo people the forest isn’t a resource to be mined, it is another community, like their own, it is complex, interdependent and infinity precious.