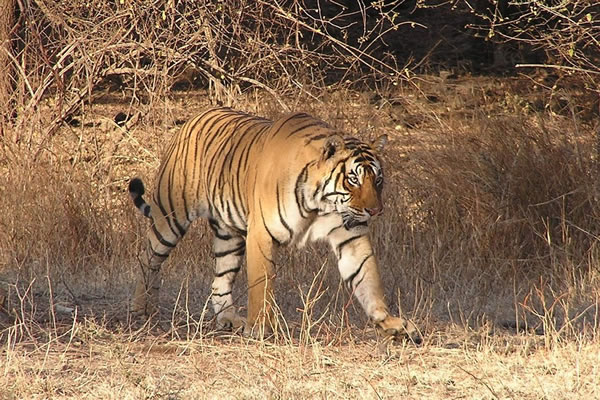 In the first six months of 2012, India has lost 48 tigers. If this death toll of this endangered species continues throughout the year it will mark an alarming increase compared with 56 tiger deaths reported in 2010 and 52 in 2011.

According to the National Tiger Conservation Authority (NTCA), out of these 48 deaths they report 19 to be clear-cut cases of poaching, with Corbett National Park in Uttarakhand and the Tadoba Tiger Reserve in Maharashtra being the hardest hit.

Wildlife experts fear that poaching deaths are in fact a lot higher, as many are not reported due to a lack of intelligence gathering. There is constant pressure from Far Eastern markets for tiger parts, fuelling the illegal trade and threatening the survival of tigers in the wild.

Yet the illegal animal trade is only one reason that tigers in India are being killed – another is fear. World Land Trust (WLT) is working in partnership with the Wildlife Trust of India (WTI) to address the escalating conflict between people and tigers to save the lives of both.

There are over one billion people living in India; the population and development of the country is spiralling at an alarming rate, forcing people to live in ever closer proximity to 65 per cent of the world’s tigers. Conflict is simply inevitable. This was tragically seen between October 2010 and March 2011, when tigers killed seven people from villages settled near the Corbett National Park in Uttarakhand.

The villages are settled within a wildlife corridor, known as the Chilkiya-Kota Corridor, which is part of a traditional route that India’s species – from the tiger to the Asian elephant – use to roam the country in search of food and to find mating partners. Often people and wildlife choose to settle or travel through the same areas for precisely the same reasons – to take advantage of the abundance of food, water sources, or easy terrain.  This creates a wildlife conflict zone.

To tackle this escalating crisis, WTI presents a solution to families living in harm’s way by offering them the chance to voluntarily relocate away from the wildlife conflict zone. The positive news is that since the tiger attacks, the villagers are now in favour of moving out of the Chilkiya-Kota Corridor and the Forest and Wildlife Departments has given their full support to WTI. We are now working on turning this area into a protected wildlife corridor and relocating villagers into better housing in a safe location, where they can continue their lives without the constant fear of tiger attacks.

“It is a tragedy that it took the death of seven people before this could be achieved. It is high price to pay and it is a sacrifice being made by India’s poorest people.” He added: “You can’t continue to let over one billion people live in such close proximity to 65 per cent of the world’s tigers. These animals need space, and they will kill you in order to get that space. I have only one solution – give them space.”