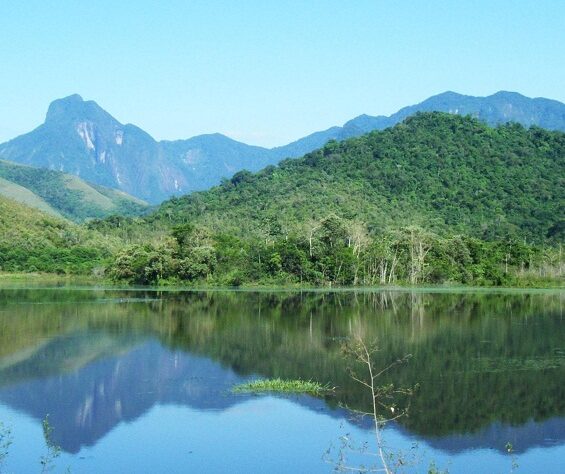 Visiting a nature reserve in Brazil, supported by the World Land Trust (WLT), was an unforgettable experience for Ameesh Manek

A blue mist settles on the distant mountains that are framed in the lodge window and morning bird song brings the rainforest to life. This is the scene that Ameesh woke up to every day during his stay at the eco-tourism lodge in the Guapi Assu Reserve.

Stretching over 18,000 acres of tropical forest nestled on mountainous slopes, the reserve is just two hours drive from the Brazil’s bustling capital Rio de Janeiro, but it is a pristine haven for a wealth of wildlife – from over 450 species of birds to more than 60 species of mammal.

A top predator, the puma, is known to roam through the reserve’s forests in search of food and breeding partners. In the tree-top canopy the still and silent sloth clings to a sturdy bough, while Capuchin monkeys’ play noisily and a rare sighting of the Critically Endangered Woolly Spider monkey may be glimpsed.

The Puma, also known as the Cougar or Mountain Lion, is hunted because it is considered a threat to livestock. The Guapi Assu Reserve provide a safe haven for this top predator to roam © Fundación Jocotoco

Here WLT helps support conservation projects through local partner, REGUA (Reserva Ecológica de Guapiaçu), who own and manage the reserve.  After bidding for the Rainforest Experience at a charity auction, during Barclay Banks’ Gala Dinner where he works as Head of Global Deals, Ameesh spent four days exploring the beauty of the reserve and getting to know its wildlife.

Ameesh enthused about the hospitality he received from REGUA directors, Nicholas and Raquel Locke, saying:

“Raquel was an amazing hostess; she treated us as part of her family and nothing was too much for her. While Nicholas is a very cool guy and really knowledgeable about the reserve’s bird life; we spent many evenings together chatting and we learnt a lot about wildlife. But at the same time, he knew that we weren’t birders so made sure that itinerary was flexible and perfectly suited to what we wanted.”

The Guapi Assu Bird Lodge within the reserve is the perfect place to stay if you want to explore the Atlantic Rainforest, while helping to support its conservation © Thor Ostybe

Ameesh’s holiday itinerary and his personal experience gives an insight into what you could expect while visiting the Guapi Assu Reserve:

Day one: Pick-up from the airport in Rio de Janeiro by a REGUA ranger, arriving at the reserve just two hours later. Ameesh said:

“The ranger explained how he was a bit of a drifter when he first went to work for the reserve; he didn’t really have any money or plans for the future. Since, he has built his own home, he runs his own farm, he’s saved money, and has sent his children to school. He was so friendly and enthusiastic about his work – it was fantastic to see.”

Day two: Guided trek into the rainforest and a swim in fresh water pools with cascading waterfalls. Ameesh said:

“The guide was very knowledgeable about wildlife and taught us a great deal about the plant and bird life. We saw a sloth and got very close to coming across a puma – we followed its footprints for quite some way before we sadly lost them. I’ve done jungle treks before, mostly in Asia, where it’s all about the animals you see. But in REGUA it’s focused on the forest – it’s all about protecting the entire ecosystem, which I got a real appreciation for.” 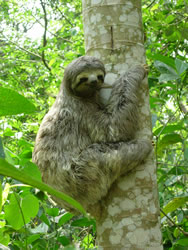 The Guapi Assu Reserve is home to the rare Brown-throated Three-toed Sloth, a charismatic animal that is frequently spotted while walking the reserve’s trails © Lee Dingain

Day three: Day’s horse riding trek in the rainforest, through rivers and waterfalls.

“This was a real adventure,” Ameesh said. “I had never ridden before so it was a fantastic experience – worlds apart from plodding around a park in the outskirts of London.”

Day four: Tour of the reserve to learn more about the reforestation work and other conservation projects. Ameesh said:

“To be honest, I wasn’t very environmentally aware before; I knew that conservation of the rainforest was a big issue and I took an interest in it, but I never would have called myself an environmentalist. But since visiting REGUA and seeing the conservation work on the ground I am much more passionate.”

WLT funds nature reserves in some of the most beautiful, wildlife-rich places on Earth and our partners rely on small-scale ecotourism to fund their conservation projects. So by visiting their reserves you are directly helping to support the protection of the natural world.

For our supporters, there is no better way of seeing the beauty and importance of the nature reserve or conservation work you have helped fund. It gives you an incredible insight into what your donation is achieving and the knowledge that you are really making a difference.

Watch a video about this Atlantic Rainforest conservation project in Brazil: