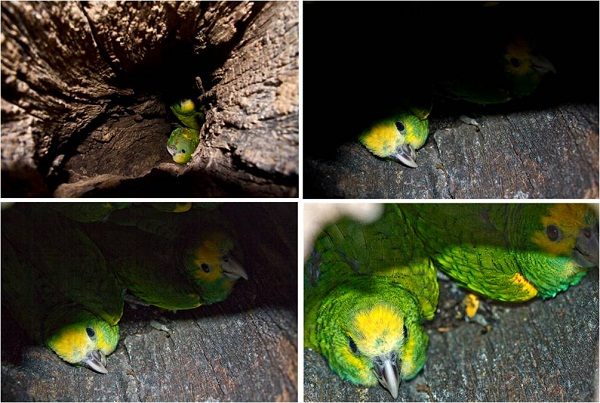 Thanks to the generosity of World Land Trust (WLT) supporters, we have successfully raised £10,000 in just six months to protect Endangered parrots on Margarita Island

In 2009, WLT helped create a 1,809 acre (732 ha) nature reserve to protect threatened dry forest on a Caribbean Island, off the north coast of Venezuela.

The nature reserve was created to protect the habitat of the Yellow-shouldered Parrot, an Endangered species in Venezuela that has its last remaining stronghold on Margarita Island.

Our partner, Asociación Civil Provita, work tirelessly with local communities to raise awareness about the importance of protecting the Yellow-shouldered Parrot; the species has now become such an important symbol for the islander’s culture and environment that every year they throw a festival in its honour.

Yet, sadly much of the island’s population suffer from crippling poverty and for many the price that a few parrots can fetch in the illegal pet trade market is too great a reward to miss.

Last year, 16 parrot chicks were stolen from their nest boxes at the research centre where Provita’s wildlife rangers were caring, guarding and monitoring the chicks until they were strong enough to fly free into the wild.

Thankfully the rangers were not harmed in the robbery but WLT realised that Provita needed more support to protect the parrots from the illegal pet trade and ensure the safety of their team of rangers.

In March, we launched the Margarita Island’s Parrot Appeal and in just six months we raised £10,000 thanks to the generosity of our supporters. These funds will help support the monitoring of the eggs and chicks, as well as the training of local people as wildlife rangers to increase protection, raise environmental awareness within the community, and provide alternative income and secure jobs.

This year’s Yellow-shouldered Parrot breeding season on Margarita Island is now over and it saw 27 young parrots fly free into the WLT-funded nature reserve.

Since May, seven rangers led by Pablo Antonio Millán, who is being supported through WLT’s Keeper of the Wild programme, worked tirelessly day and night to protect 14 nests. Constant police support during night shifts was very important for this breeding season, as on several occasions hunters and poachers were seen in the area.

After the last chick fledged from its nest, ranger Pablo said:

“I felt as if the parents were telling me not to stay protecting an empty nest. I felt as if they were saying: ‘We’re taking our chick to fly with us today, you don’t have to worry anymore.’ And that’s exactly what happened. I’m very relieved now that all the chicks have fledged, since it is a great responsibility for all of us rangers, with big risks but also huge satisfaction.”

Thanks to WLT supporters, Provita will now be able to strengthen their team of rangers so that they will face less risk in next year’s parrot breeding season and hopefully even greater success.

Thank you for helping us as we work to secure the future survival of this species in the wild.