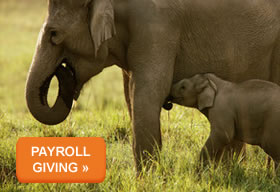 While our dedicated supporters remain generous, WLT knows that the financial crisis means that sometimes it isn’t possible to give as much as you would like. Meanwhile the threats to land and wildlife are neverending and urgent: we need more funds than ever before to continue our work and save some of the most threatened habitats and species on Earth.

Payroll Giving offers a great solution for many: it makes it cheaper for you to donate because it is taken from your pay before tax – for example, a donation of £10 per month costs a basic rate tax payer just £8 from your take-home pay and the taxman pays the rest. It also makes it cheaper for the WLT, because we do not have the wait and administration involved when claiming Gift Aid.

Are you a higher rate tax payer? If so, the deal is even better – donations made before tax mean that WLT will receive £10 for just £6 you would have seen in take-home pay. In fact, for higher rate taxpayers this is the only way to pass on your 40 per cent or 50 per cent tax to charity without the added complication of completing a Self-Assessment tax return.

If you work for a company that is signed up for Payroll Giving, you can make a one-off or regular donation straight from your pay: just ask them for a mandate to complete. There is no more to it. Some companies will even match their employees’ donations; if you work for one of these companies please change over to Payroll Giving as soon as you can, as this will make your donation go even further.  If your company does not offer Payroll Giving, ask your employer to sign up now.

For employers, the Payroll Giving scheme is simple to set up and run; you will need to sign up with a Payroll Giving Agency (PGA) approved by HM Revenue & Customs. Once your employees have signed a mandate stating how much of their income they wish to donate and to which charity, you then send the monthly deductions to the PGA. It is as simple as that.

If you are retired you may be able to make donations through Pension Giving, out of a pension scheme from a former employer.

Over 730,000 people across the UK have spotted that Payroll Giving is a brilliant way to support their favourite charities and the number is going up fast. The scheme raised almost £120 million for charity in the UK last year. If you sign up now to donate £10 a month to WLT then within just 10 months you would have raised £100: the cost of saving an acre of critically threatened habitat from destruction – begin your tax free giving today.