How to fundraise for charity SEARCH NEWS 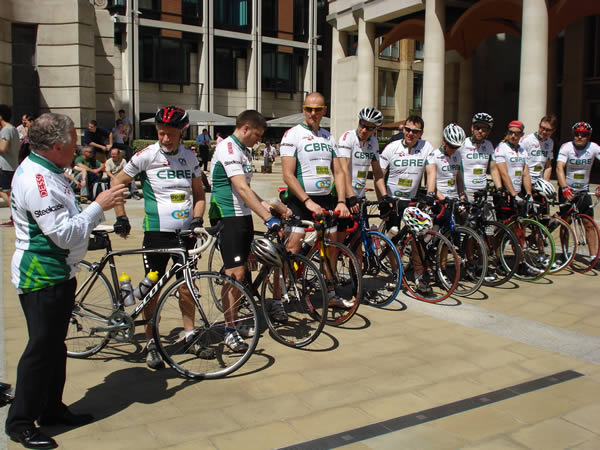 On 2 June, a group of 65 cyclists left Toulouse, south-western France, on a journey to Barcelona, the capital of Catalonia in Spain, to raise money for charity.

The bike ride took the riders down through the historic town of Carcassonne and then to Prades in the foothills of the Pyrenees. From there they crossed the Pyrenees at Col de Ares – seeing them pedal a 35 kilometre continuous ascent – before descending into Camprodon, followed by Gerona, and then, after five gruelling days cycling, finally arriving in Barcelona.

If this was not challenging enough, a few very keen cyclists left from Paternoster Square, by St Paul’s Cathedral in London, at noon on 25 May to cycle down to the start.

This extreme adventure has seen the cyclists successfully raise over £33,000 already, which will be split between four charities –AgeUK, UNICEF, Red Cross and WLT.

The charity ride is organised by Rob Smith and a few enthusiastic colleagues who work for CBRE, a commercial property consultancy. Their first bike ride fundraiser was in 2010, when they rode from London to Paris, raising nearly £5,000 for WLT.

The team at CBRE Charity Bike Ride used original and practical ways a raising a substantial amount of money for charity © Rob Smith.

WLT is delighted to be chosen again as one of the charities to benefit from the CBRE Charity Bike Ride and that the fundraising event is such a success.

So what has been the key to their fundraising achievement?

Even though this is a challenging bike ride, Rob and his team make sure that it is a fun adventure that anyone can take part in. Rob said:

“I want to get as many people involved as possible; I am quite evangelical about cycling. We try and make it accessible for all – from enthusiastic club cyclists to people that haven’t ridden a bike in years.”

They have certainly managed to achieve this, with one quite amazing participant; among the cyclists on the London to Paris bike ride was a near 70 year-old who’d had a quadruple bi-pass.

Rob and his team decided to organise their own fundraising event, instead of joining an already established charity bike ride, in order to keep costs down and to ensure more money went to charity. Rob explained:

“I felt that official charity bike rides were not a good fundraising model; they are often very expensive to enter and only a small percentage goes to charity. I saw one where you had to raise up to £1,000 in order to enter and only a third of this amount went the charity – meaning that donations were basically going towards cyclists having a good time.”

Rob and his team try and keep the entry fee as low as possible, asking for a few hundred pounds to cover costs, which must be donated by the participant and not taken from the amount they fundraise. This ensures that a 100 per cent of the money donated goes directly to charity.

3. Gain the support of businesses

Businesses and corporates are often keen to give financial backing to help support a good cause.

Rob and his team encouraged the company they work for, CBRE, to pay for their cycling shirts. They then went on to sell advertising spots of their shirts to other businesses, at £1,000 for each promotion. Rob said:

“One of our corporate supporters, a construction company called ISG, also donated a bike to give away at our post-ride event in mid-September, when we’ll be presenting the charities with their cheques.”

Thank you for saving rainforests

The team at CBRE Charity Bike Ride have used their passion for cycling and innovative fundraising ideas to raise a substantial amount of money – helping WLT save some of the most threatened habitats and wildlife on Earth.

WLT would like to thank them for their hard work and commitment. We are glad that all the cyclists had such a fantastic experience conquering the heights of the Pyrenees.

Please show your support for this charity bike ride by donating online on their Virgin Money Giving page and help WLT save more threatened habitats and wildlife across the world.