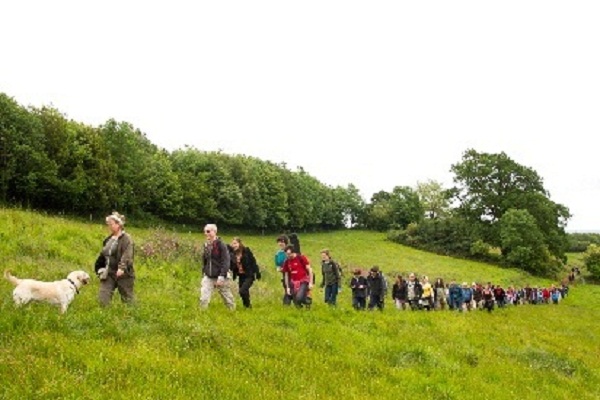 Celebrate evolution, biodiversity and the work of the World Land Trust (WLT) this August bank holiday, Saturday 25 and Sunday 26, by joining a fundraising ramble over the Quantock Hills in Somerset

Inspired by Richard Dawkins’ book, The Ancestor’s Tale, a couple of science teachers in Somerset decided to found an event which celebrates evolution and biodiversity. This year it is generously raising funds for WLT.

Taking part in the walk is free, but surrounding events – including a keynote lecture from Professor Richard Dawkins – are now listed on The Ancestor’s Trail website and can be booked with accommodation by contributing to the event’s Crowdfunder pitch.

WLT council member, Kevin Cox, will also be speaking on Saturday evening to give an insight into our conservation projects across the world. Kevin is a magazine publisher who founded Origin Publishing in 1997; the company was bought by BBC Magazines in 2004 and Kevin took over responsibility for a number of BBC titles, including BBC Wildlife Magazine. He is now non-executive chairman of Origin Publishing and is also on the council of RSPB.

Chris Jenord, an Ancestor’s Trail organiser, sent this report about the event:

“Imagine if you will, the evolutionary ‘Tree of Life’. Now drape this horizontally over the Quantock Hills in Somerset, lining up its trunk and branches with the hills’ many footpaths. Add yourself at the end of one of the branches and start walking towards its roots. Symbolically, each step will take you thousands, if not millions of years back in time.

A folk band playing at The Ancestor’s Trail; last year, 150 took part in the walk and fundraising event © Chris Jenord

“Eventually, after 13 miles of walking you will arrive at a place called Kilve – a beautiful, rugged fossil beach on the Bristol Channel. Essentially your journey will have been a biological pilgrimage taking you all the way back to your shared origins around 3.7 billion years ago. However, if a 13 mile walk seems too far, we have many much shorter branches of ‘Darwin’s Tree’ from which to choose.

“Along the way our walkers encounter a range of contributions, including life stories from some of our cousins in the family tree, tales of drifting continents and horrifying mass extinctions. We also incorporate music along the trail including folk ballads, classical pieces, a choir, and even evolutionary rap!

“This year, on Saturday 25 and Sunday 26 August you are invited to join us on the third Ancestor’s Trail. The event is a celebration, despite the fact that our planet’s biodiversity is in such crisis. In an effort to give something back, we aim to raise funds and membership for nature conservation charities.

“Evolution has generated its most prodigious biodiversity in far flung parts of the world, so we decided we should support a charity whose sole ambition is to protect biodiversity internationally. What better choice than the World Land Trust?”

WLT would like to thank everyone involved in organising The Ancestor’s Trail fundraising event for helping us save some of the most threatened habitats and wildlife on Earth.