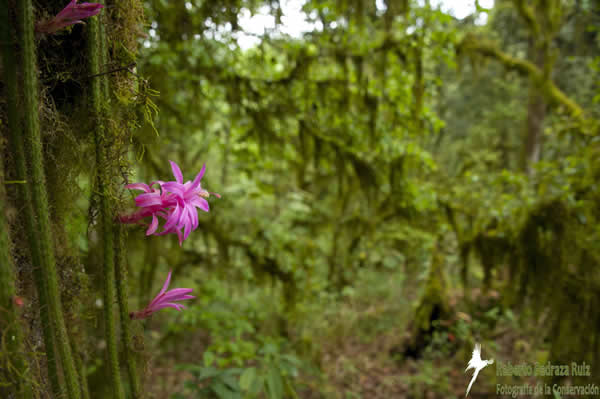 Award-winning photographer Roberto Pedraza captures a rare flowering cactus in the wilds of Mexico, yet Bearded-Wood partridge chicks run rings around him

In the most diverse region of Mexico, Roberto Pedraza is working to protect the vast wilderness of the Sierra Gorda – where he was born and his family set up the conservation organisation, Grupo Ecológico Sierra Gorda (GESG).

As an award-winning photographer, Roberto loves nothing more than capturing the beauty of the environment that surrounds him. Following his latest adventures on a photography expedition to some of the remote nature reserves, he sent WLT this up-date about his wildlife encounters:

Flowering cactus hangs from a cedar tree in a nature reserve protecting ancient cloud forest in the most diverse region of Mexico, the Sierra Gorda © Roberto Pedraza Ruiz

“I have just arrived back after a whole day in the field, surveying the reserves in the Hoya del Hielo area and its ancient cloud forests, which I’ve not been to in a couple of months. I went by myself, so I could go off the trail and visit some of my favourite spots where I know there are special plants.

“April is the flowering month for the epiphytic cacti that hang from the big oaks and cedars up there, as well as some orchids and pinguicula (commonly known as the butterworts, a genus of carnivorous plants that use their sticky, glandular leaves to lure, trap and digest insects). All were on full display and after a rainy night and light fog there was a beautiful light.

“On returning from the trip, a friend identified one of the cacti as the Aporocactus flagelliformis (main image); it happens to be a rare species and Hoya del Hielo is the only area where it occurs in the Sierra Gorda state, so extra-nice to have them here.

“The best bit of the trip was spotting a family of Bearded-Wood partridge – it is a most valuable bird, endemic to Mexico and quite in trouble. I found the small guys as I climbed some rocks to get a better shot of the cacti; two tiny chicks tried to hide when I appeared, while the mama (about a football size) went almost crazy trying to rescue her kids.

An endangered species of orchid, Rhynchostele rossii, spotted by Roberto on his latest photography expedition to remote nature reserves in the Sierra Gorda © Roberto Pedraza Ruiz

“It’s incredible how they can hide just a meter away and are camouflaged really well, but I was able to imitate the chicks call with excellent results. Soon the mama was making circles around me (for sure she thought was an oversized-ugly chick!) trying to find the source of the call. I have never seen the chicks before – they are beautiful cinnamon balls.

“This was a once in a lifetime encounter with a very rare species; I had plenty of good sightings but no photo, even though I was at the right place and time with all my photography gear. These chickens are incredibly fast moving – hopping and running deep in the bushes – so no luck.

“But this is yet more proof that we are doing the right thing, protecting these wild pockets where humans appear just every two months to scare the poor chicks.”

Watch this video interview with Roberto on his conservation work: