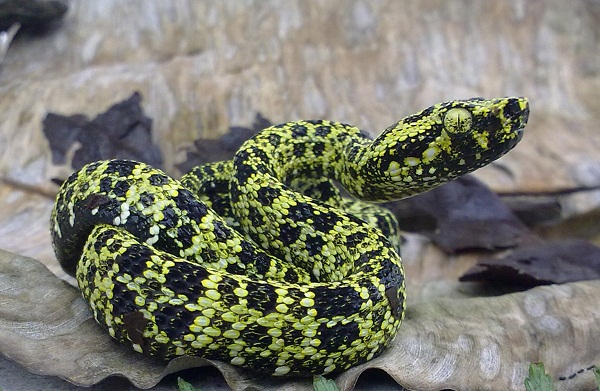 Curled up on a branch in the forest, this beautiful vibrant green snake was spotted by rangers Luis, an accomplished wildlife photographer, and his brother Jesus.

Lou Jost, co-founder of EcoMinga, identified the snake species as a Bothrops pulcher (or depending on the taxonomist, the Bothriopsis or Bothriechis), but he is not a 100 per cent sure – so if you have any other suggestion, please let us know in the comments box below.

Reserve rangers, Jesus and Luis Recalde, spot a venomous snake in the eastern Andes of Ecuador. In 2010, Luis photographed animal behaviour new to science that was featured in BBC Wildlife Magazine © Luis Recalde

Luis and Jesus are supported by the Keepers of the Wild programme and they carry out daily patrols of the reserves, an area covering 7,900 acres (3,200 hectares), to protect them from illegal hunting, logging, and environmental damage.

During these eight hour treks, the brothers come across a rich diversity of animals and plant species – from a Black-and-Chestnut Eagle that whistles above them, to rare orchids, Capuchin monkeys, Saddle-backed Tamarins, and Woolly Monkeys. If they are really luck, they may glimpse a rare sighting of a bear within the reserves.

A cause of great excitement is when the rangers spot the tracks of big cats, as they would love to see a jaguar one day. Luis said:

“We all want to see the jaguar because we have seen his tracks and we know he has probably seen us – we want to be even with him!”

But Luis is no stranger to exciting discoveries; in 2010 he photographed behaviour that was new to science, an image of a Caecilian attempting to eat a giant earthworm that was published in BBC Wildlife Magazine. He said:

“This was the most unusual species behaviour I’ve ever seen – and I saw it happen again recently.”

Watch this video about Fundación Ecominga and their work discovering species new to science: