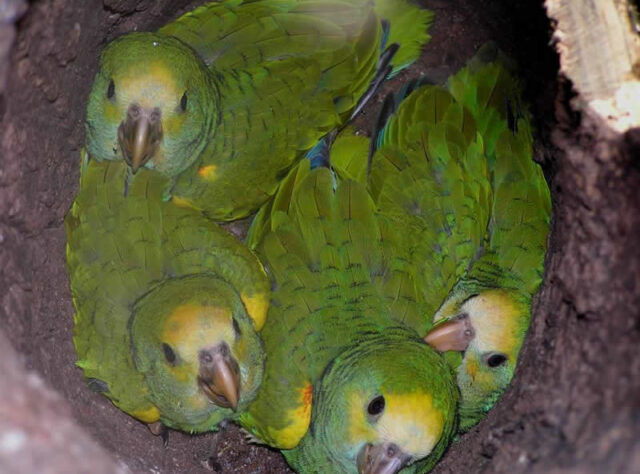 This ethical green gift will nurture and protect Endangered Yellow-shouldered Parrot chicks, allowing you to share your commitment to saving endangered wildlife and protecting our fragile environment.

On Margarita Island off the north coast of Venezuela, the survival of endangered parrot chicks is under threat from the illegal pet trade.

The men broke into the centre where wildlife rangers were caring, guarding and monitoring the chicks until they were strong enough to fly free into the wild.

Researchers monitor the population of Yellow-shouldered Parrot on Margarita Island; donate to the Margarita Island Parrot Appeal and help support this vital work to save the species © Jon Paul Rodriguez/Provita

In response to this threat, World Land Trust (working in partnership with Provita) launched the Margarita Island’s Parrot Appeal in March 2012 to urgently raise £10,000 in six months. The ambitious appeal will give the rangers the support they need to protect this seasons parrot chicks and help ensure their continued survival.

Thankfully none of the rangers were harmed in the robbery and 50 fledglings flew free into the 1,809 acre (732 hectare) protected nature reserve, called the Chacaracual Community Conservation Area. WLT helped create this reserve in 2008 and it now provides a safe haven for the Yellow-shouldered Parrot and other threatened wildlife.

Why protect the Yellow-shouldered Parrot?

In Venezuela the Yellow-shouldered Parrot is Endangered (internationally classified Vulnerable) and Margarita Island is one of its last strongholds. Provita work tirelessly with local communities to raise awareness about the importance of protecting the Yellow-shouldered Parrot; this beautiful bird is so important to the islanders’ culture and environment that every year they throw a festival in its honour.

Yet sadly much of the island’s population suffer from crippling poverty; for many the price that a few parrots can fetch in the illegal pet trade market is too great a reward to miss. There is no doubt that poachers will try to return again this summer.

By donating £25 or more, your Mum will receive a Gift Pack containing a personalised certificate, a wildlife card, WLT’s newsletter, and a Venezuela project brief © WLT

We urgently need your support to tackle this escalating crisis. Share your commitment to saving endangered animals by donating as little as £25 to the Margarita Island’s Parrot Appeal as an ethical green gift that will nurture and protect these endangered parrot chicks.

Every donation comes with a beautifully designed gift pack personalised specially for your Mum, recognising your joint support for protecting the planet’s threatened wildlife.

Delivery information: For delivery before Mother’s Day (UK only) the recommended last order date for the gift packs is 15 March.