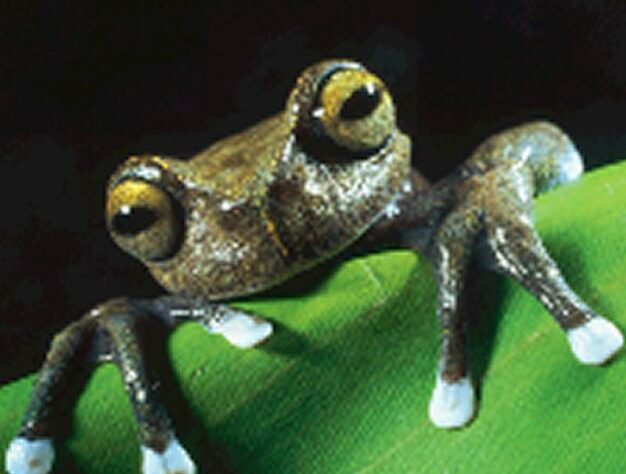 Celebrate the success of amphibian conservation across the world on Leap Day, February 29, and raise awareness about the challenges these species still face

World Land Trust (WLT) has recently helped save the only known habitat of the Golden Poison Frog in Colombia and has, over the years, funded many reserves across the tropics to protect a large numbers of reptiles and amphibians.

We are therefore delighted to hear that Amphibian Ark is launching an international event to encourage people to visit their local zoos on up-coming leap day, February 29, in recognition of the success of amphibian conservation in captivity and in the wild.

The day event, dubbed Leaping Ahead of Extinction, promotes the work of 58 zoos across the world and other amphibian breeding facilities that have captive breeding populations of endangered amphibians.

It is widely known that amphibians and reptiles are indicators of the health of the environment and the current amphibian extinction crisis is one of the greatest conservation challenges that we have ever faced. Amphibians are particularly sensitive to environmental degradation and their survival is threatened by deforestation, loss of wetland habitat, pollution and climate change.

As well as this, a deadly fungal disease called chytridiomycosis is wiping out whole species; already 165 amphibians have become extinct, while another 130 are feared to be extinct.

WLT believes Leaping Ahead of Extinction is a great way to raise awareness about this crisis and highlight the vital part that many zoos play in the conservation of threatened species.

For its part WLT will continue to take every opportunity to save amphibians across the world; here are some success stories from our partners who are working to protect habitats vital for their survival.

Discovered in 2011, this toad was named in honour of World Land Trust trustee Dr Nigel Simpson for his dedication to protecting the Andean cloud forests of Ecuador © Nigel Simpson.

High on a mountain in the eastern Andes of Ecuador, a small population of Simpson’s Plumb Toad cling to the leaves of bromeliads and ferns in a small remote area surrounding two nature reserves, owned by WLT partner organisation Fundación EcoMinga. This toad exists nowhere else on Earth.

Discovered in 2011, the toad was named in honour of WLT trustee Dr Nigel Simpson for his dedication to protecting the Andean cloud forests of Ecuador. The Simpson’s Plumb Toad and other vulnerable species are threatened by the loss and fragmentation of their habitat, mainly due to the expansion of agriculture.

Lou Jost, a botanist who co-founded EcoMinga, is dedicated to exploring the challenging terrain of the Pastaza watershed where the reserves have been created. Over the years, he and his team have successfully discovered a vast range of species new to science. Lou said: “We can be sure that there are still many other new species as yet undiscovered in these amazingly special places.” 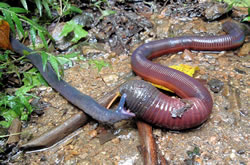 This image of a Caecilian attempting to eat a giant earthworm was species behaviour new to science and had never been documented before reserve ranger Luis Recalde captured this fascinating photograph © Luis Recalde.

This incredible image of a caecilian (a type of amphibian with no legs) attempting to eat a metre long giant earthworm was taken by reserve ranger, Luis Recalde, in 2010. This species behaviour was new to science, having never before been documented.

The picture was taken on the Candelaria Reserve, which protects forests in the Eastern Andes. Luis is an accomplished wildlife photographer but was delighted by his discovery and the story being published in BBC Wildlife Magazine. He said: “This was the most unusual species behaviour I’ve ever seen – and I saw it happen again recently.”

Luis is supported through WLT’s Keepers of the Wild, a programme that is putting more reserve rangers in field and providing them with much needed equipment. A camera not only allows Luis to capture images of rare wildlife but to also document any signs of illegal hunting or environmental damage in the reserve.

Deadliest frog in the world protected

A healthy population of the Endangered Golden Poison Frog survive in the rich undergrowth of their new reserve – the first safe haven created for the protection of this incredible species, thanks to the World Land Trust (WLT) and our partners ProAves © ProAves

Just 55mm in size, this tiny vibrant creature carries a single milligram of toxin – enough poison to kill about 10 humans. Yet people pose a much greater threat to the species with a weapon that their toxins cannot defend against – bulldozers. Habitat damage and destruction is the major threat to the species’ survival. It is considered by many to be on the edge of extinction and was completely unprotected until now.