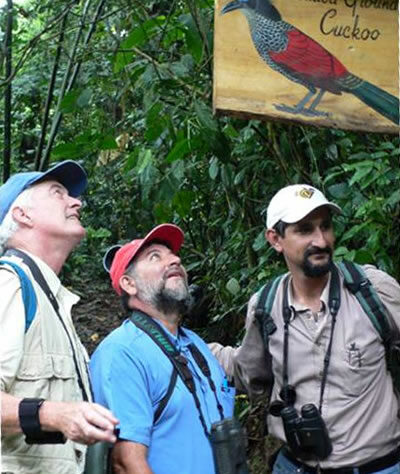 This award is presented annually to an individual who has made extraordinary scientific contributions in the field of conservation, restoration, and preservation of birds and their habitats. In 2001 he received the Eisenmann Medal from the Linnaean Society of New York and in 2006 the Chandler Robbins Distinguished Service Award from the American Birding Association.

It was while bird-watching and recording bird song in Ecuador in 1997 that Bob Ridgely heard a distant, but strong hoot, not unlike an owl (or even a dog barking); it stopped him in his tracks. This wasn’t a call that he had heard before. A couple of seconds later a big bird came crashing out of the undergrowth that he didn’t recognise either. In fact, as he recalls, ‘It was stunningly different’. 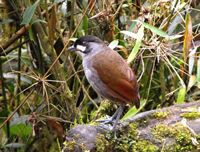 It turned out to be an entirely new and quite distinctive species of antpitta, subsequently named the Jocotoco Antpitta, because of its call which resembles ‘yocatoco’ (the name used by local farmers). Despite the fact that the trail where it was discovered had been travelled by many naturalists and ornithologists before, and wasn’t far from a road used for commercial transport, it defied identification probably due to its secretive behaviour and very small territory.

The Jocotoco Antpitta is only found in wet moss-covered forest characterised by the presence of Chusquea bamboo and since its boggy habitat and streams are now closely protected in the Tapichalaca reserve it is believed that numbers are slowly increasing. Visitors to the Tapichalaca Lodge (Casa Simpson, named after WLT trustee Nigel Simpson, who funded its construction) may be lucky enough to be able to watch the forest-floor antics of this spectacular bird whose fate could so easily have been extinction before discovery.