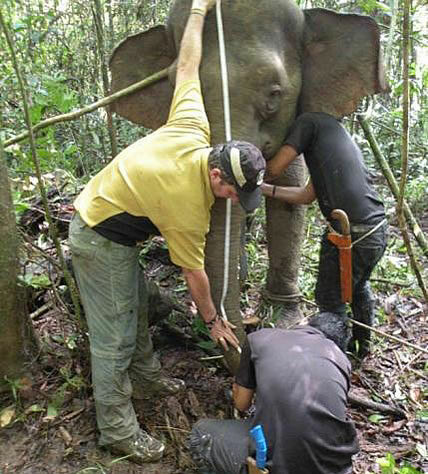 Saving the iconic species of Borneo’s jungle: bridging the forest gap for Orangutans and tracking the world’s smallest elephants

By building rope bridges for Orangutans and fitting satellite collars to Pygmy elephants, conservationists in Malaysian Borneo have been giving a helping hand to the orange-furred Great Ape and the world’s smallest elephant.

This crucial work, supported by conservation organisation HUTAN (a World Land Trust partner), will help these endangered species as they travel through their forest home in search of food and breeding partners – vastly improving their survival prospects.

Recently, four female Pygmy elephants were fitted with satellite collars in the Lower Kinabatangan Wildlife Sanctuary in Sabah state of Borneo, as part of a collaborative project between HUTAN, the Sabah Wildlife Department, and the Danau Girang Field Centre. The team went on to re-collar one bull, named Gading, who was first collared in July 2008.

The Bornean or Pygmy elephant is thought to be a subspecies of the Asian elephant and the smallest elephant in the world. Asian elephants are classified as Endangered by the IUCN Red List; their numbers are suffering due to habitat loss, poaching and increased human-elephant conflict.

Their once dense, undisturbed forest in the Lower Kinabatangan region has suffered extensive deforestation and fragmentation to make way for Palm Oil plantations, increasing conflict between elephants and people.

“The herd there, estimated at about 200 to 250 individuals, finds it difficult to move between flooded lands, swamps, fenced plantations, villages, and nature lodges. Moreover, uncontrolled tourism, with sometimes up to 20 boats aligned along river banks at less than five meters from where the elephants graze, increases the pressure on the herd.”

Five elephants have been fitted with a satellite collar, providing important information on the availability of suitable elephant habitat in the region. Priorities can then be made to protect or reforest crucial areas, creating a contiguous habitat along the Kinabatangan River. Benoît said:

“It is time that we acted to re-establish quality habitat and provide space for the elephants in the Kinabatangan.”

Members of the team learning how to climb up into the forest canopy to install the new bridges. ©HUTAN

A team of staff and volunteers from Chester Zoo (who are supporters of WLT) travelled to Borneo to build new Orangutan bridges, in collaboration with HUTAN and the Sabah Wildlife Department. The aim is to help Orangutans that are stranded in small forest fragments, providing a link between habitats enabling the primates to travel in search of food or to find a mate.

About 80 per cent of Malaysia’s wild Orangutan population are found in the state of Sabah, with 700 individuals living in the Lower Kinabatangan region. Unfortunately, logging in the area has removed many of the tall trees which Orangutans use to cross rivers and move through the forest. Benoît said:

“Habitat fragmentation and genetic isolation now present a real danger to the Orangutan population in this area. It is hoped that the bridges will go some way towards relieving this problem, along with better conservation of forest corridors.”

The team built the Orangutan bridges using Japanese hose pipes and Chester Zoo came on board to improve the design by using materials left over from their Orangutan enclosures. Over three days, the group managed to build and repair four bridges and help install a new camera-trap, allowing non-intrusive monitoring of the Great Apes and other wildlife.

Network of support for conservation success

Although the World Land Trust (WLT) has not been directly involved in funding these projects, we are delighted to see such strong and successful collaboration between our partner conservation group in Borneo, Chester Zoo, and the government’s Sabah Wildlife Department.

The Danau Girang Field Centre, owned by the Sabah Wildlife Department and supported by Cardiff University, works closely with both WLT’s partners in Borneo, HUTAN and Leap Spiral. Its purpose is to further scientific research with the aim of contributing to long-term conservation projects in the area.

With Borneo’s forests suffering an alarming rate of destruction and the spiralling cost of land in the country, protecting it for conservation is an increasing challenge. Yet, this strong network of individuals and groups all fighting for the survival of threatened species can only breed fresh hope.