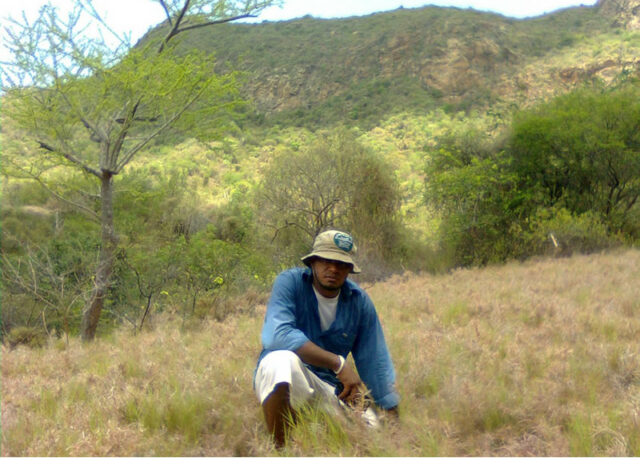 Ranger Franklin Vásquez has been helping to create a tree nursery with the local El Horcón community on Margarita Island, off the east coast of Venezuela. The project has proven to be very successful; once established the tree nursery will be used for reforestation projects and to provide trees to sell at local markets, creating a sustainable income for local people.

Franklin, working for conservation organisation Asociación Civil Provita, is supported through the Keepers of the Wild appeal launched by the World land Trust (WLT). The initiative is employing local people to put more rangers in the field to protect wildlife, while also providing them with vital resources. On a local scale, the rangers help tackle the damaging environmental and social issues that face some of the poorest people in the world.

Recently, Franklin was surveying the nature reserve and surrounding area; gathering information on the main vegetation types, the different fauna and flora species, and noting any points of interest for people visiting the reserve. Sadly, while carrying out this work, he came across several dead Margarita deer (Odocoielus virginianus margaritae).

Bibiana Sucre, from Provita, explained the conservation importance of the deer.

“It is a very controversial subspecies,” she said, “it is under discussion whether this is the same species found on mainland Venezuela. If not, the deer is endemic to Margarita and found nowhere else on Earth. Either way, its population on Margarita Island is considered Critically Endangered on Venezuelan Red List of threatened species.”

Finding signs of illegal hunting in the reserve is extremely saddening for Provita, whose rangers are working tirelessly to prevent this and with the support of Keepers of the Wild they are far better equipped to succeed now. Bibiana said:

“This is why we must strengthen the team of rangers working to protect endemic and endangered biodiversity.”

Franklin has already provided how vital this role is and two part-time rangers from the local El Horcón community have recently been appointed to act as back-up.

Franklin and the other rangers work closely with local people to raise awareness about the threats facing wildlife and how illegal hunting could lead to the extinction of rare and endangered animals, as well as highlighting the importance of protecting the environment.

Creating enthusiasm for their work and getting people involved in conservation is essential to ensuring the long-term success of their projects.

Margarita Island, off the east coast of Venezuela, has two very contrasting sides. Almost three million visitors flock to the eastern side of the island every year to enjoy its white sands and tropical climate, making it Venezuela’s number one tourism destination. Yet despite the money that is generated through tourism, Margarita Island suffers crippling social and environmental problems – from poverty and gender inequality, to habitat destruction.

Unknown to most of the visitors, the western side of the island is isolated from the spiralling development and is a natural haven, home to an array of wildlife. With support from WLT in 2009, Provita were able to purchase land in this area and create a nature reserve, protecting endangered and endemic species. As well as carrying out vital conservation work, Provita help support the area’s local communities. This social and environmental success is largely achieved through the dedication and hard work of the reserve rangers.