The Big Give, not big enough to cope SEARCH NEWS

World Land Trust (WLT) had put a huge amount of effort into galvanising activity and donations for Big Give Christmas Challenge week (5-9 December).  We had raised £50,000 in matched funding in advance from a group of very generous supporters, and we had our online donors poised ready to donate at 10am on Monday 5 December to help reach our online target of £100,000.

WLT staff and donors alike were, therefore, frustrated beyond words when the Big Give site crashed shortly after 10am on Monday and did not function for the rest of the day. We were distracted all day by phone calls and emails from would-be donors who had planned their time to make a donation only to find they couldn’t.  And most people thought it was WLT’s fault, that our web links weren’t working, and we had a lot of explaining and apologising on behalf of the Big Give to do.

And since not everyone contacted us, we believe that a lot more people thought that they were let down by WLT, and we have no idea how much damage that did. Monday evening was a very low point indeed.

El Jagueycito Reserve, Mexico was protected by Buy an Acre funding. Funds raised through the Big Give will help purchase and protect more threatened habitats like this in Central and South America.  © Roberto Pedraza Ruiz

Prior to 5 December we were quietly optimistic that we would reach our ambitious target of £100,000 online during the week, and were focusing on the first day to raise at least half.  We know that many of our donors were only geared up for that day, and we know many simply gave up.

Our spirits were raised a little on Tuesday morning when the Big Give site was up and running at 10am and appeared to be functional during the day, although again, many people contacted us during the day, and also throughout the week, saying they were finding it impossible to make their donation. We know we missed out on a lot of donations because of this. Thursday and Friday were a fiasco with the matched funding running out before 11am on Thursday and Friday’s information being totally random – sometimes the website said donations would be matched and sometimes saying the sponsor fund had run out.

Big Give also encouraged donations after the close of the challenge knowing that they would not be matched, leading several donors to contact us with conspiracy theories (since the Charities Trust takes 4% in admin charges, more than credit card companies).  In the end WLT is just very sorry that the system couldn’t live up to its claims.

Monday 12 December.  A significant number of donors did make their donations on Friday evening and throughout Saturday, out of sheer desperation because they had pledged to do it, and this raised in excess of £6,000 in unmatched donations over the weekend.  We have also come in to a deluge of emails and post from people who are utterly distressed and disappointed (and much stronger language) and feel that charities have been seriously let down.

The good news is that WLT has, according to Big Give calculations, raised £134.105. However these figures aren’t accurate according to our information and calculations and we believe, are as follows:

Total funds raised (not including Gift Aid or minus charities Trust Administrative fees): £141,644.00

When all is said and done this is a fantastic result. We just wish that the Big Give could have been ready to receive donations and not caused charities and donors alike such angst.  Perhaps there will be a response and possible new funds will be released to compensate charities for the loss of ill-will and frustration on behalf of their donors.

Meanwhile very many thanks to everyone who did manage to donate.  We will be pleased to receive all comments on this page, good and bad, and will report on your views in the next eBulletin. 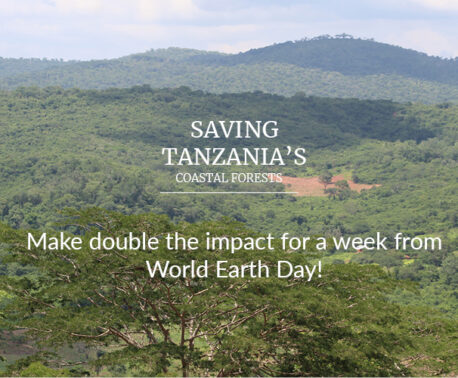 In just 48 hours, World Earth Day will be shining a spotlight on environmental issues big and small and for …

World Land Trust (WLT) is hoping to raise £120,000 in the next three days for essential nature conservation work. But, …