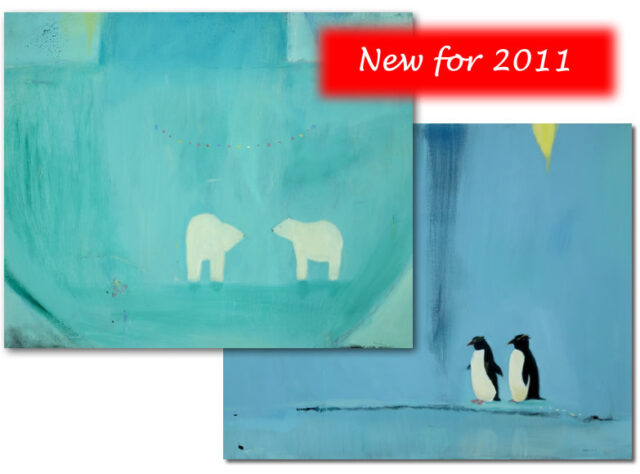 Deceptively simple images of a twosome of Polar Bears and a Penguin pair, against a vast ice-blue background, have been chosen at this year’s Christmas card designs by the World Land Trust (WLT).

The artist, Andrew Squire, approached WLT in 2008 offering his help in generating awareness about the plight of some of the world’s most treasured animals. WLT immediately saw the relevance of Andrew’s images which evocatively capture the spirit of animals within an open, vibrant and undisturbed space; a natural environment without which they cannot survive. Space is vitally important to wildlife, particularly large mammals which can require huge territories in which to roam, feed and breed.

WLT has subsequently been the recipient of funds resulting from the sale of Andrew’s pictures at two exhibitions held at Thompson’s Gallery in Marylebone, London. The first, Andrew’s Ark took place in 2009, and this year his exhibition ‘Hinterland’, resulted from his travels to remote parts of Tanzania, including WLT’s Reforestation programme in the Bunduki Gap. About Andrew’s work, WLT Trustee and former President of the Society of Wildlife Artists, Bruce Pearson says:

“If an important part of conservation is to see nature differently and value it in new and fresh ways, then Andrew provokes just the right response. I love his work.”

Andrew has donated the use of his Polar Bears and Penguins to WLT to produce these beautiful Christmas cards, and because we feel that they should have a use after Christmas as well they are specially designed to be used as postcards after they have served their first purpose. For every pack of cards brought, containing three of each design, funds will go towards WLT’s conservation work across the world – saving some of the most threatened habitats and wildlife on Earth.

We hope you will choose to promote your support for WLT by sending either the new cards or other designs from our small exclusive range this Christmas, and share your passion for wildlife while helping to support the protection of the world’s wild spaces. 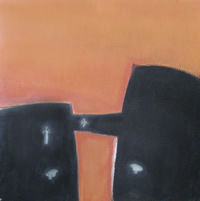 "Corridor" one of the abstract pieces depicting a wildlife corridor in a fragmented landscape. Picture © Andrew Squire. The opening …