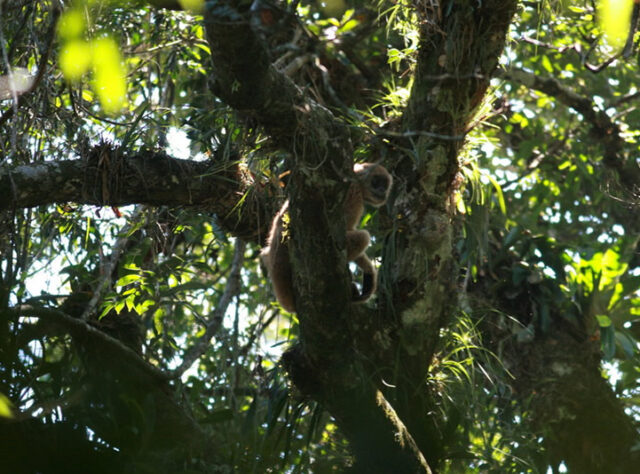 The Muriqui, or Woolly Spider monkey, is not an easy animal to see — never mind photograph. It is the rarest primate in South America and endemic to the Atlantic Rainforest, meaning it is found nowhere else on Earth.

These long fawn coloured monkeys, with delicate facial patterns, are not aggressive but quiet and reclusive. Through hunting and the loss of its habitat, the Muriqui population crashed and in 1987 it was estimated that there were less than 400 in the wild, making them the rarest primate in South America.

In the south-east of Brazil, World Land Trust (WLT) partner organisation REGUA (Reserva Ecológica de Guapi Assu) are providing a safe haven for a small but healthy population of Muriquis in their Guapi Assu Reserve. Nestled on the slopes of the Serra dos Órgãos Mountains, in the coastal state of Rio de Janeiro, the reserve protects 18,000 acres (about 7,284 hectares) of Atlantic Rainforest.

The REGUA rangers have been instrumental in reducing hunting pressure, so for the small resident population of Muriquis on the reserve this is good news. Every three to four months the group is seen, generally with young, but these sightings are brief and it has been hard to get a good photograph before.

In a determined pursuit to photograph this rare creature, ranger Adilei Carvalho da Cunha took some days off from his usual work guiding tours on the reserve. After many attempts to track down the monkeys, Adilei found himself at the researcher’s cabin on the Green Trail — 650 meters above sea level in pristine forest — when he suddenly heard some fruit falling and a gentle call.

Stealthily, he approached a large tree and spied a female feasting on some fruit. She had seen Adilei but did not consider him a threat so continued to eat, then lazily stretched and lay down to doze — as is often their midday habit.

Adilei was keen to get as good a photo as possible and he began approaching cautiously.  Whereupon she woke up and took off, merging into the canopy of the forest and disappeared. Adilei was delighted with the images of this rare encounter.