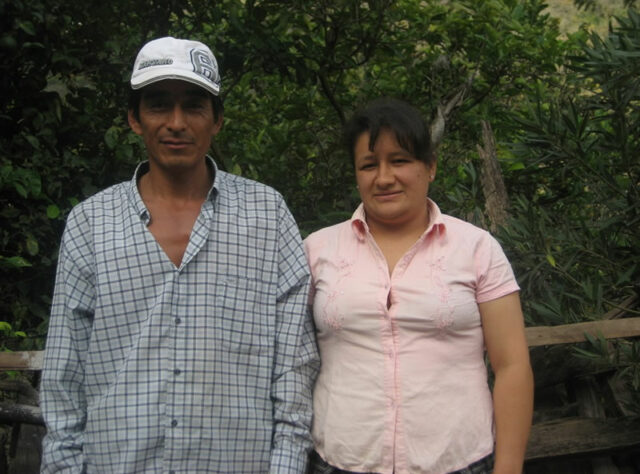 After celebrating his marriage, ranger José Acaro returns to his other love: protecting threatened habitat and wildlife in his corner of Ecuador

Now that the wedding festivities are over, José Acaro returns to work as a ranger protecting the Laipuna Reserve in southern Ecuador.

Living with his wife Olivia Armijose in the nearby village of Naranjito, José travels an hour to work either by foot or on the back of his mule. Being a ranger has given him a secure job and regular income.

“Having a permanent income is of course good and gives you stability. But the best part of being a ranger is meeting interesting people, learning new things, and feeling good about valuing the forest while protecting plants and animals.”

His new wife Olivia is from the city of Santo Domingo in north-west Ecuador, but her parents were originally from the area near the reserve; together with thousands of people from the Loja province, her family left their homes in the late 1960s because of a severe drought and started new lives in cities across Ecuador. After many years, Olivia has returned to her roots.

Recent photos captured by José during his patrols around the reserve. Taken in the same location, the photos demonstrate the difference between the wet and dry seasons. Left: the lush green forest in July. Right: the brown dry forest as it was in October. © NCI

José’s main role as a ranger is to patrol the reserve to keep it free from cattle or hunters, repair the walking trails and fix the fences, as well as measuring the growth of trees and recording this data.

“The animal that I would most like to see in the wild is the Puma – it is so beautiful and mysterious. But of course, I do not know what I would do if one was in front of me.”

The Laipuna Reserve is home to the Puma, as well as the River Otter and 55 species of endemic bird that are found nowhere else on Earth. It is one the flagship projects for Nature and Culture International (WLT partner) in southern Ecuador and they work in collaboration with local communities to protect 12,000 acres (about 4,850 hectares) of this threatened Tumbesian dry forest along the Catamayo River.

Over 95 per cent of the region’s natural forest cover has been lost, so protecting this remaining habitat is of utmost priority.

Why not congratulate José and Olivia on their marriage by donating to Keepers of the Wild appeal, helping to support his work to protect the reserve and its array of wildlife. Launched by World Land Trust (WLT), the appeal is supporting rangers across the world to help safeguard some of the most threatened habitats and wildlife on Earth.