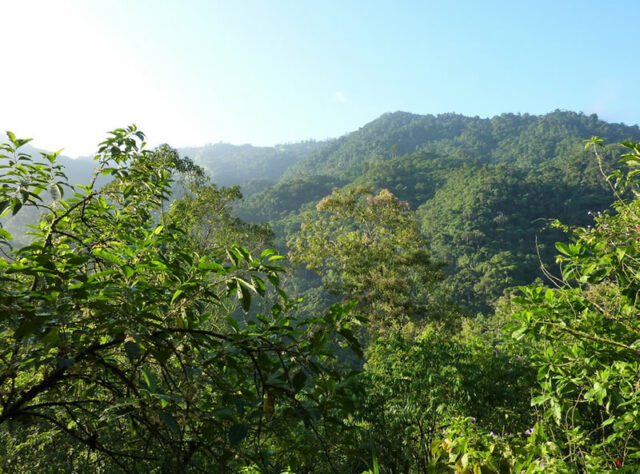 Returning from his 13th visit to the Buenaventura Reserve in south-west Ecuador, Nigel Simpson gives an exclusive account of his experience. As WLT trustee and co-founder of Fundación Jocotoco (FJ), who own and run Buenaventura, he is an expert on the reserve and its wildlife.

“Each time I visit Buenaventura I see for myself that we have been able to prevent extinctions in this part of the Tropical Andes. The forest, the large mammals, birds, reptiles and amphibians are all showing very positive trends.

“Buenaventura today is an island of cloud forest, yet only a few years ago it was a mosaic of pastures and forest remnants. The rate of the forest’s regeneration has been remarkable, especially in the lower more humid parts.

“I was accompanied by FJ’s Reserves Director, Javier Robayo (a graduate botanist), Marco Galvez (the reserve administrator and a resident of nearby Zaruma), and Baldomiro Beccera (who lives within the reserve). Baldo has worked most of his life in the reserve, first as a farmer and for the last 10 years as the senior ranger.

“As we ate breakfast at sunrise in the open-sided lodge we were invaded by a flock of eight Globally Threatened Rufous-headed Chachalacas, emerging from the foliage to feast on bananas. The hummingbird feeders were also busy with about 50 individuals of at least six species, and on the slope below us a pair of the impressive and rare Guayaquil Woodpeckers foraged. A party of noisy Howler Monkeys were performing close by, demonstrating another conservation success: the original three groups recorded 10 years ago have expanded to five groups.

An abundance of rare wildlife 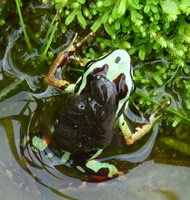 Nigel spotted this Epidobates anthonii, a type of poison arrow frog, carrying its tadpoles. The species was abundant in the reserve. © Nigel Simpson

“Our first task was to look at a new land purchase of around 300 acres (121 hectares) of pasture with forest remnants. This was funded by donations from the WLT together with other conservation groups. Some of this land will be left to regenerate naturally, and parts of it will be planted with native trees grown in local nurseries.

“A trail had been cut for us the previous day, through 500 metres of tall grass, and overnight fresh footprints of at least five mammals had appeared including armadillo, agouti, peccary, Ocelot and Puma, giving further proof of resident wildlife.

“Most striking was the sheer abundance of amphibians. Every footstep disturbed tiny frogs which jumped away like grasshoppers, and streams and ditches were crowded with hundreds of frogs and tadpoles. A small snake we encountered, no doubt enjoying the feast, has proved to be another new species and is now awaiting description. We have noted with concern that the deadly fungus disease which is destroying frog populations in the Americas is still spreading, but thankfully the reptiles and amphibians at Buenaventura (home to 41 species, 34 of them endemic to Ecuador) are thriving.

“The flagship species of the reserve is the endangered El Oro Parakeet, with more than half of the known world population found here. A nest-box programme, in place for about 10 years, has resulted in the number of this species increasing by about 50 per cent. While we walked across the area three separate flocks flew by us.

“Later in the day we had an encounter with the remarkable, and Globally Threatened, Long-wattled Umbrellabird. These too have become more numerous with up to five males gathering at a lek, and sometimes visiting the Lodge. (A lek is a group of the males, of some animal species, which come together for a competitive mating display during the breeding season. Often including elaborate plumage displays and vocal challenges). Another lek species, the Club-winged Manakin, whose males dance and vibrate their wing feathers to create noise, is also noticeably more abundant.

The unusual Long-wattled Umbrellabird, a species which is doing well at the reserve. © Nigel Simpson

“The recovery of the original forest is most obvious in the valley below the Lodge. In October 2004, Javier (FJ’s Reserves Director) and I planted a group of young trees and their progress has been monitored since; they are now fruiting closed-canopy forest. Young palms and tree ferns are appearing and it is impressive to see the abundance of epiphytes (which comprise the majority of plant diversity in these forests) that have already become established. A typical walk here along a kilometre of trail can result in 50 species of birds, several of them Globally Threatened.”

More information about the Buenaventura Reserve