Bird once thought extinct is a conservation success story, but for how long? SEARCH NEWS 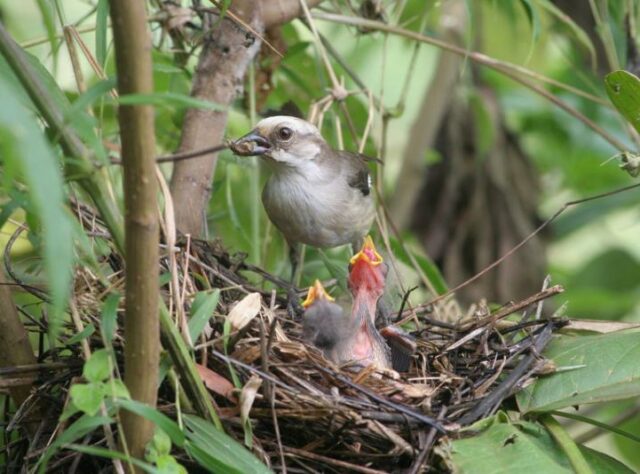 Numbers of the Pale-headed Brush-Finch have dramatically increased, but the World Land Trust (WLT) questions why it is no longer considered a Critically Endangered species

After more than a decade of sustained conservation action, one of the world’s rarest birds has increased in number from fewer than 40 to over 100 pairs. This exceptional achievement is thanks to World Land Trust (WLT) partner organisation, Fundación Jocotoco. Zoltan Waliczky, Executive Director of Fundación Jocotoco, said:

“For a long time, everyone thought that this bird was extinct. When it was rediscovered in 1998, conservationists realised we had been handed a unique second chance and were determined not to waste it. Sustained, focused international cooperation is what made the difference.”

It is likely that the Pale-headed Brush-Finch has always been a rare bird with a tiny range, restricted to two arid valleys in the Andes of southern Ecuador. In the late 1960s, however, agriculture began to destroy its limited habitat and the species was not seen for more than 30 years.

In addition to habitat loss Brush-finches are parisitised by cowbirds. Like a cuckoos, these birds lay their eggs in Brush-finch nests often leading to the death of the host’s chicks. Photo © Niels Krabbe

In 1998, experts from Jocotoco led an exhibition that found a tiny population of the brush-finch in a 60 acre patch of scrub woodland in the Río Yunguilla Valley. The conservation organisation moved quickly to purchase the land, establishing the Yunguilla Reserve.

Years of research into why the brush-finch numbers were decreasing, followed by sustained conservation efforts, led to their population beginning to slowly increase. From fewer than 40, there are over 100 pairs with numbers still climbing.

This conservation success story was a huge collaborative effort, with instrumental support coming from the American Bird Conservancy (ABC). Although delighted with the achievement, Sara Lara from ABC warned that this is not the end of the struggle; instead, it proves that we can succeed given sufficient resources and it should serve as a call to redouble our efforts. She said:

“Any species whose entire global range is limited to just one site of a few hundred acres faces particularly difficult challenges. This bird still perches precariously on the knife edge between survival and extinction, and its survival totally depends on the continuing conservation actions.”

In light of this, the WLT questions if it right that the conservation status of the brush-finch has been downlisted from Critically Endangered to Endangered, on the IUCN Red List of globally threatened birds. John Burton, CEO of WLT, said:

“It would seem that the motive for ‘downlisting’ was more to do with wanting to demonstrate conservation success than to demonstrate the actual status of species in the wild, and their conservation needs. Otherwise, as any practising conservationist would probably agree, the precautionary principle should always apply.”

“The fact that should any of the recent conservation measures cease, it could be wiped out in a couple of years, does not seem to have influenced the statisticians. And the fact that the very act of downgrading could influence funders into withdrawing funds does not seem to be taken into account.”

This success story was made possible by a network of dedicated conservationists and vital funding; it is an exceptional achievement and the brush-finch numbers continue to climb. Yet, the Yunguilla Reserve only has room for 150 pairs, so it is crucial that we protect more habitat for the Pale-headed Brush-Finch. Its survival still hangs in the balance.