New Keeper of the Wild in Brazil: Discover how a simple camera can help a ranger fight illegal hunting, deforestation and development SEARCH NEWS 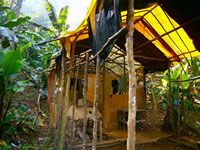 Proof that simple resources, like a camera, can make a real difference to reserve rangers as they battle to protect the Atlantic Rainforest in Brazil

Stopping the illegal hunting, deforestation and development surrounding the Guapi Assu Reserve in Brazil’s Atlantic Rainforest has recently become much safer and easier thanks to a camera.

The World Land Trust (WLT) is raising funds for much needed resources for reserve rangers, through the Keepers of the Wild appeal. Olympus kindly donated a camera to our Brazilian rangers, after they were put in touch with us by Media Bounty, one of our corporate supporters.

The camera has enabled the rangers, who work for our partner organisation REGUA (Reserva Ecológica de Guapi Assu), to capture evidence of illegal activities surrounding the reserve and inform the -authorities.

How is a camera tackling illegal activity?

An illegal structure erected in “No-mans land”. The photo was taken by Jairo on his Keepers of the Wild camera. Photo © Jairo/REGUA.

Hunting on REGUA land is practically non-existent, having been reduced by an estimated 98 percent since 2001 – this has only been achieved through the hard work and dedication of the rangers. Yet, there are many areas surrounding the reserve where the land is under no real ownership. Known as no man’s land, these areas are prime targets for illegal hunting, deforestation and development.

Recently ranger Jairo, who is supported through the Keepers of the Wild appeal, was told by his neighbours that a young man was suddenly trying to lay a claim to a piece of land next to Guapi Assu Reserve; he had illegally cut down trees and built a small house. Jairo took pictures of the evidence on his “Keepers of the Wild” camera, before informing the authorities who promptly arrived to arrest the perpetrator. 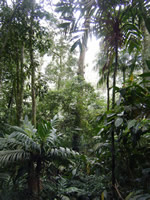 The Atlantic forest within the Guapi Assu Reserve remains protected thanks to the hard work of Jairo and the other rangers at REGUA. Photo © Helen Cavilla.

Ranger Jairo has also been using his new camera to capture evidence of illegal animal traps found in areas surrounding the reserve. Traditional hunting involves building a platform above the ground where the hunter can lay in wait over a few days and nights, luring unsuspecting animals with bait, such as corn seed or bananas.

But there is also a much crueler device, known as shot traps. These are triggered by animals walking their usual paths through the forests and touching the trip wires. The traps are always aimed to fire above ankle height; this injures but does not instantly killing the animal, so it is often found dead a long distance from the trap.

REGUA have been actively campaigning against these traps to stop this brutal way of hunting. They have been seizing them from hunters and handing them over to the authorities, as they are considered to be an illegal firearm.

Not surprisingly, this kind of direct action against hunting can be extremely dangerous. The rangers are always unarmed but must face hunters with weapons; one ranger supported by Keepers of the Wild, Messias Gomes da Silva, has even received death threats because of his commitment to the hunting ban.

This is why providing rangers with cameras is crucial; it gives them the power and evidence to fight against illegal hunting, deforestation and development – safely.

Jairo is one of three rangers at REGUA to be funded by the Keepers of the Wild appeal. Money raised by BIAZA member zoos and the 2010 Royal Parks Half Marathon is supporting these rangers. 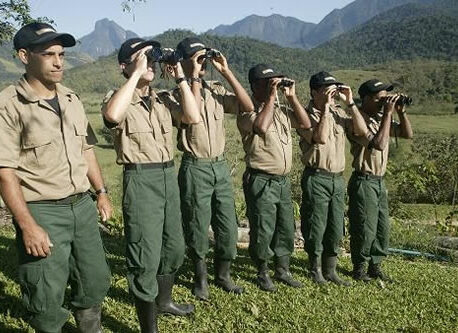 Celebrating Keepers of the Wild anniversary 06/03/2012