More land to be saved in Colombia and Ecuador SEARCH NEWS

The World Land Trust (WLT) celebrates funding nature reserves in Colombia and Ecuador, helping our partner organisations to increase their protection of threatened habitats and wildlife

In the face of Colombia’s surging development and urban expansion, protecting the Chocó region has become a conservation priority. Spanning the entire west coast of the country, the Chocó has one of the highest concentrations of endemic species on Earth, meaning that many of the plant and animals that live here cannot be found anywhere else on the planet.

Why protect the Chocó forest?

WLT supports partner organisation, Fundación ProAves, to help fund the creation of nature reserves in this area. We are focusing on protecting the Chocó as it is a biodiversity hotspot that is being destroyed at an alarming rate, often by fires set by illicit coca and opium growers.

Many species exist only in this small region of the country, such as two Critically Endangered hummingbirds – the Gorgeted Puffleg and Colourful Puffleg. Their habitat was completely unprotected until ProAves’ stepped in to create nature reserves in this area of Colombia.

Not only does protecting the Zamarritos de Pinche Reserve safeguard wildlife, but reducing deforestation in this area also has the potential to protect local people from the threat of natural disasters such as land slides. Although small areas surrounding the reserve have been deforested, most of the original forest remains. This extensive forest cover not only provides carbon sinks (an area that absorbs more carbon than it releases) but is also critical in preventing soil erosion, reducing the potential for landslides. The area has heavy rainfall so flooding would probably increase, both in frequency and intensity, if deforestation continued.

Although the Podocarpus-el Condor Biosphere Reserve covers an impressive two and a half million acres, not all of it is under protection and the reserves comprise of a network of protected areas  mostly isolated from one another. WLT is working with partner organisation, NCI Ecuador, to connect and expand these protected areas.

Why are the new reserves important? 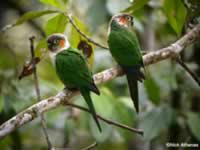 The Reserva Biological San Francisco is the second reserve supported by WLT, primarily to protect the White-breasted Parakeet. These individuals were spotted in the Tapichalaca Reserve, also in Ecuador.

The first land purchase in the north of the Podocarpus-el Condor Biosphere Reserve has expanded NCI’s existing protected area, called the Reserva Biological San Francisco, by 276 acres (112 ha). The reserve safeguards tropical mountain forest and is home to the White breasted Parakeet, an endemic to southern Ecuador and northern Peru.

This reserve links to three other protected areas and the aim is to eventually create a wildlife corridor that connects the Podocarpus National Park to the Bosque Protector Corazon de Oro, forming a contiguous area of protected habitat.

The second purchase of 247 acres (100 ha) is extending the Bombuscaro Reserve, while the third purchase of 74 acres (30 ha) created the Los Rubies Reserve that lies next to the Chinchipe Municipal Reserve.Both these purchases are protecting critically threatened Amazonian rainforest and safeguarding important river basins.