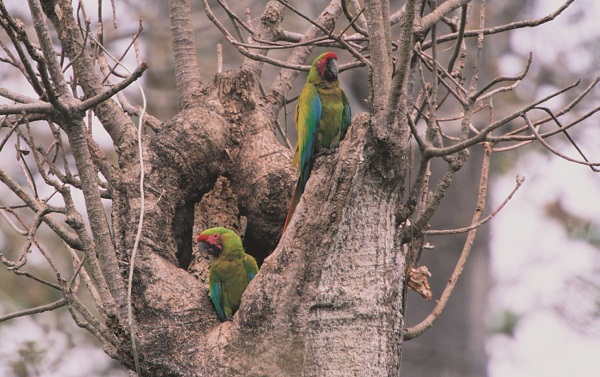 Working to increase sightings of the reserve’s impressive array of threatened and rare bird species is all part of Galo’s job as a reserve ranger, funded by the World Land Trust’s Keepers of the Wild appeal

During his work as head ranger at the Rio Canande Reserve in north-west Ecuador, a highpoint of the month for Galo is spotting three Great Green Macaws perched on a nearby tree. Great Green Macaws live in family groups of around five or six and they patrol small home ranges.

It is estimated the total population is less than 2,500 birds; these Endangered species are hunted for the pet trade or killed for their beautiful feathers. They are also considered to be an agricultural pest so are often shot by farmers and their habitat is being destroyed at an alarming rate to make way for agriculture. 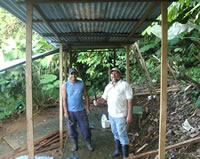 During his 11 years working for Fundación Jocotoco, Galo has been lucky enough to see many rare and threatened species, yet spotting the Great Green Macaw is a personal highlight. Over the past few years, the rangers have created artificial bird nests, positioning them in Guayacán trees to encourage the Macaws to breed.

Galo’s continued conservation work and reserve management is directly helping to protect this globally threatened species. In the past month, Galo has been training a new ranger on how to spot and distinguish different bird species.

He has also made further progress with the bird-watching tower; he has been sawing the timber collected from the fallen trees within the reserve, which will be used to build the tower. With about 30 near threatened or restricted range bird species at Río Canandé, the bird-watching tower will give visitors an even better chance at spotting these rare birds. An added highlight to what is already an impressive wildlife reserve.

As with all our Keepers of the Wild, Galo is posting regular updates on the website about his adventures as reserve ranger working in one of wildest places on Earth.

More information on WLT's Keepers of the Wild