Partner Focus: How to protect the hornbills of Borneo SEARCH NEWS 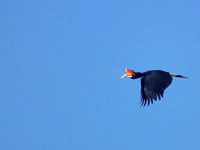 To discover more about the little-known population status of hornbills in the Lower Kinabatangan floodplain, in the Malaysian state of Sabah in north-east Borneo, local people were interviewed by conservation organisation HUTAN (a World land Trust (WLT) partner). Hornbills are a major asset for the tourism industry in the Kinabatangan Wildlife Sanctuary and they also play a key role in forest ecology through seeds dispersal. There are eight species of hornbill in the area – Wreathed Hornbill, Bushy-crested Hornbill, Oriental pied Hornbill, Helmeted Hornbill, Rhinoceros Hornbill, Wrinkled Hornbill, White crowned Hornbill and Black Hornbill – with the latter five being classed as Near Threatened. The hornbills were relatively well known by most members of the community, with the most common species being the Pied and Rhinoceros Hornbill. More species are spotted in the lower parts of the floodplain, in areas where forest patches are in better condition compared to the upper parts. A few decades ago,before deforestation reached peak levels, hornbills were heard regularly but seen rarely from the village, as they preferred to remain in the forest and away from people’s houses. With loss of forest and increased forest fragmentation, hornbill sightings have increased over the past 30 years. However, most people interviewed said that sightings of larger species are now becoming rare – especially the Helmeted, Wrinkled and Wreathed Hornbills – suggesting a possible decline in numbers in the area. 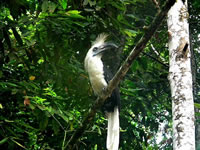 White crowned Hornbill; one of eight species found in the lower Kinabatangan area. Photographed by Rob Colgan near the Danau Girang Field Centre.

Local people felt that this decline was due to the destruction of large trees that were used as nesting sites and the decrease in food supplies, as well as the general degradation of the environment in Kinabatangan. HUTAN believes that although forests in Kinabatangan are highly degraded and fragmented, they are still able to provide high levels of food. The forests support an amazing abundance and diversity of wildlife; plant species are still diverse and produce regular food supplies to an array of different frugivorous animals. It therefore seems unlikely that a shortage of food alone would explain the decline of large hornbill species. Instead, it is more likely that numbers are suffering from a lack of suitable nesting sites. Larger hornbill species need suitably sized cavities only found in large, mature trees. During the past 30 years, excessive logging and deforestation to make way for plantation agriculture (mainly oil palm) has resulted in the destruction of all emergent trees. Because hornbills are long lived and are also slow breeders it will take a time before a major fall in numbers will become apparent. To better understand and halt this general decline, HUTAN are focussing on a rescue package which will include; undertaking detailed ecological surveys to locate key areas for the birds that need further protection, implementing an awareness programme with local community members and oil palm plantation workers to raise awareness about the protected status of the birds, and initiating an artificial nest box programme to be carried out by the local community. There is an urgent need to improve the current situation of hornbills in the Kinabatangan. The information provided by local people has been a first step towards implementing measures to ensure the survival of this ‘emblem of the rainforest’ for the future.