Join Abel Reséndiz as he shares his exciting wildlife sightings in one of the wildest regions in the world, where he works as a reserve ranger funded by the World Land Trust’s Keepers of the Wild appeal

Abel Reséndiz, the WLT Keeper of the Wild for Mexico proudly displays his Keepers of the Wild badge. Photo © Roberto Pedraza.

In the wild and remote mountains and canyons of the Sierra Gorda, central Mexico, ranger Abel works to protect a reserve that is home to a huge range of wildlife. Mexico is one of the most eco-diverse countries in the world and the Sierra Gorda Biosphere Reserve, covering a vast 946,000 acres (383,000 hectares), is the most ecologically diverse area of the country. Although called a reserve, much of the land inside the Sierra Gorda Biosphere remains under private ownership and therefore unprotected. The World Land Trust (WLT) is working with our partner organisation GESG (Grupo Ecológico Sierra Gorda) to purchase this privately owned land, creating permanant wildlife reserves. The protection and management of these vast and remote reserves would be impossible without dedicated rangers and Abel is being funded through WLT’s Keepers of the Wild appeal.

“I feel proud of my work”, said Abel, “because we are protecting special places that were being destroyed or were under pressure from logging, ranching, frequent wildfires, and poachers.”

Abel patrols, manages and protects five different reserves within the protected area; spanning vast distances across wild terrain, it can be a whole day’s hike or horseback ride to access some of the more remote reserves and this is why Abel is keen to have another ranger employed at the reserve.

“When we have to patrol the remote areas it is not easy terrain and can be tricky to move around,” said Abel, “you don’t want a broken leg in the middle of nowhere.”

Wildlife spotting in the remote wilds 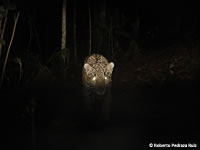 A Jaguar photographed in the Sierra Gorda Biosphere Reserve – The species would be a dream sighting for Abel. Photo © Roberto Pedraza.

Despite the difficulties of his job, Abel is surrounded by some of the most impressive diversity of wildlife and flora on Earth. Abel works closely with GESG’s technical advisor, Roberto Pedraza; he is a keen wildlife photographer who has won international awards for his work. Abel loves going wildlife spotting with Roberto, sharing their passion for the environment they are working to protect. Abel’s most exciting wildlife sighting recently was a few weeks ago when he spotted a Tayra, a very unusual weasel-like animal, after years of hoping to see one. Abel said:

“It was very exciting to spot the Tayra as it is a very rare to see them and Roberto has photographed them previously without me, so it was his turn to be very jealous of my sighting.”

Tayra populations are known to be decreasing, especially in Mexico; although the species as a whole is listed as a Least Concern, it is thought to be locally threatened in many areas because of habitat destruction. The most unusual species behaviour that Abel witnessed was earlier this year when a flock of very bold macaws flew into his village. The majority of macaw species are endangered in the wild; they are often very colourful and many are known for their impressive size. Abel said:

“The flock went straight to the small plaza in Valle Verde to eat in the trees – it was an amazing sight and they didn’t care about the people being around. I called Roberto so he could photograph them, but when he arrived they were gone.”

The species that Abel is desperate to spot is a jaguar, known to live within GESG’s reserves.

"This would be a major reward, but so far no luck", said Abel. "I have seen fresh footprints and scats, but so far not the big guy."

As with all our Keepers of the Wild, Abel will be posting regular updates on the website about his adventures as reserve ranger working in one of wildest places on Earth.

More Keepers of the Wild information