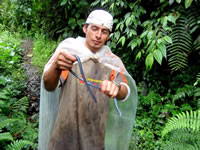 Keen wildlife photographer, Luis Recalde, shares his passion for the species and environment he protects as a reserve ranger, funded by the World Land Trust’s Keepers of the Wild appeal

Luis will often spend all day walking, to carry-out reserve maintenance and wildlife protection. He said: “Our main job is to care for the plants and animals so no one cuts down trees, takes orchids, or hunts on the reserves.”

For several years now, Luis and the rangers have also been reforesting and regenerating old pastures at the Cerro Candelaria Reserve as part of the WLT Reforestation programme.  Luis said: “Monkeys and birds will soon be able to use the new forests that we made!”

Luis’ regular eight hour patrol of the reserves is also a great opportunity to spot the array of wildlife. Lizards and frogs are often seen by the rangers, as well as Capuchin monkeys, Saddle-backed Tamarins, and Woolly Monkeys. They also sometimes come across snakes and if they are lucky they will see bears, but this is very rare.

A cause of great excitement is when the rangers spot the tracks of big cats, as they would love to see a jaguar one day. Luis said:

“We all want to see the jaguar because we have seen his tracks and we know he has probably seen us – we want to be even with him!”

Lately, Luis has seen a Black-and-Chestnut Eagle most days at the reserve and even when he can’t see it he hears whistling above him. He has sent WLT spectacular photographs of the impressive bird of prey.

Luis is an accomplished wildlife photographer and in 2010 he captured animal behaviour that was new to science, an image of a Caecilian attempting to eat a giant earthworm that was published in BBC Wildlife Magazine. He said:

“This was the most unusual species behaviour I’ve ever seen – and I saw it happen again recently.”

As with all the rangers funded by our Keepers of the Wild appeal, Luis will post regular updates on our website about his plight to protect threatened habitat and wildlife.