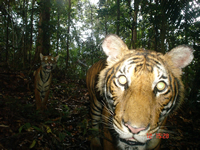 Your chance to win the camera-trap competition 2011, in collaboration with BBC Wildlife Magazine and the World Land Trust, make sure you enter by 15 July 2011

Malayan Tiger: The winning photo from the 2010 camera-trap competition by Mark Rayan Darmaraj.

Win £3,000 for your conservation project and have your photograph featured in BBC Wildlife Magazine, by entering the camera-trap competition 2011. If you use a camera-trap as part of your research or conservation work, then enter your photograph by 15 July 2011. Camera-traps are unmanned cameras left in strategic positions, either continuously recording or triggered by infra-red sensors, often capturing rare species or unusual behaviour. The three winners and runners-up will be published in the December 2011 issue of BBC Wildlife Magazine (on sale 24 November 2011). David Attenborough, WLT Patron, said:

“The use of camera-traps has revolutionized the way that animals are studied in the wild. Researchers and conservationists are now able to gain vital information on species behaviour and range without the slightest disturbance. I congratulate BBC Wildlife Magazine and World Land Trust on giving overseas Non-governmental Organisations an opportunity to share these exciting ‘behind the scenes’ images which really enable us to understand better rare and secretive species.”

More information and how to enter: