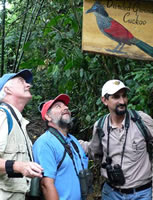 An insight into on-the-ground conservation in Ecuador’s Choco forest by reserve ranger, Galo Vélez, who is being sponsored by the World Land Trust (WLT) Keepers of the Wild appeal.

Robert Ridgely, co-founder of Fundacion Jocotoco and co-author of The Birds of Ecuador, made a special visit to the Canandé reserve hoping to see a Banded Ground Cuckoo. Despite Galo seeing this elusive bird, Bob was unlucky and had to make do with the painted sign at the reserve instead. He is joined in this photograph by park ranger, Galo Vélez (centre) and Francisco Sornoza (right). Photo © World Land Trust-US

Preparations to extend the Río Canandé Reserve, in the northeast of Ecuador, are underway and reserve ranger Galo has spent the last few months assessing the conservation status of the new area of forest to be purchased.  He said:

“In the course of assessing the new lots, it was nice to find a King vulture and an anteater. These are good indicators of the conservation status of the land that will be protected by the reserve.”

Galo is the head ranger at Canandé Reserve and having worked for Fundación Jocotoco for 11 years, Galo has encountered an impressive array of species on the reserve, and says that some personal highlights were seeing the globally threatened Great Green Macaw  and also being able to watch a Puma.

He says that the most unusual species behaviour he has witnessed was seeing an Ocelot during the day; this usually nocturnal wild cat was so close to him, only about five meters away, that Galo was even able to get a close-up photograph. While Galo hopes to one day see a Jaguar and a Choco Tapir, the species he was most excited about spotting was the endangered Banded Ground Cuckoo. He said:

“This is such a rare and charismatic species; even the famous ornithologist Bob Ridgely, who co-founded Fundación Jocotoco, hasn’t seen one!”

As well as preparing for the expansion of the reserve to provide more protection for the threatened and endemic species of the region, Galo has been carrying out a GPS survey of the trails to map the reserve for tourists, while maintaining and clearing the 10 kilometre paths.

He has also been taking tourists on tours of the reserve to bird watch; there are about 30 near threatened or restricted range species of birds at the Canandé Reserve, and at least six species are globally threatened.

Galo has also been responsible for preparing an area for the building of an observation tower, giving visitors an even better chance at spotting rare bird species that may not be seen anywhere else in the world. Galo sees his work at the Río Canandé Reserve as being very valuable, he said:

“It is important to protect the forest for the benefit of the communities around the reserve, as well as to save the environment.”

But despite Fundación Jocotoco’s commitment to protecting the area, Galo worries about the future. “Over the years I have seen so much forest lost to make way for agriculture and this is still going on”, he said. “It is possible that in the future only the reserve will remain.”

More information on Galo and the Keepers of the Wild Appeal