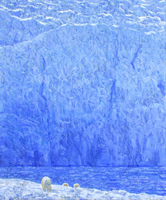 A new collection of e-cards from the World Land Trust (WLT) feature wildlife paintings by award winning artist, Darren Rees. It is easy to send these beautifully designed cards by email, as a greener way to keep in touch with friends and family. Choose between striking images of Polar Bears against a sheer backdrop of blue ice, a Humpback Whale as it smashes through the waves to feed, or a procession of leaf-cutter ants as they travel through the Amazon. Darren has been painting for over 20 years and is a highly respected, award winning artist. A knowledgeable naturalist, he also acts as a guide for wildlife tours to several overseas destinations. His trips to the Amazon inspired his painting of leaf-cutter ants, featured in WLT’s e-card range. Darren said:

“I've been lucky enough to visit the Amazon four times and the shimmering processions of leaf-cutter ants travelling across the red soil is just one of many abiding memories.”

During his first trips, Darren found flying over the Amazon’s seemingly limitless greenery a humbling experience. Yet each time he went back, he noticed ever increasing deforestation. He said: “I've noticed more clearances and more gaps in the forest – more pillaging of the rain forest for nothing more than a quick profit.” Darren was particularly struck by leaf cutter ants on his visit to the amazon. His piece titled "In God we Trust" is one of WLT's new e-Cards.

Initially, Darren began to capture the Amazon’s wildlife by sketching and painting an array of monkeys, parrots, and lizards. But he couldn't get the image of the leaf-cutter ants out of his head. When he came to paint the ants though, the image became abstract and loaded with ambiguity, leaving Darren frustrated as he had a clear message that he wanted to get across. Eventually, he found a technique that worked; he stuck the fins of green leaves onto wooden beads, representing the model ants. This mixed media approach was new for Darren, but the effect was instantly impactful with a clear meaning. Darren said:

“If you examine the green laminas further, you will see that they are part made from real bank notes. Hard cash is being carried off beneath our noses, and each American Dollar bears the legend ‘In God We Trust’.” 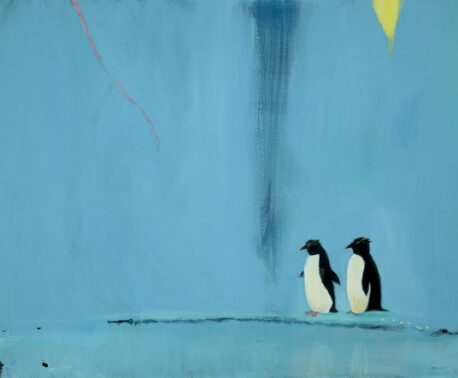