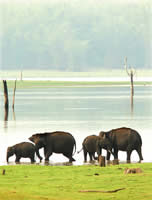 Adventures in India led World Land Trust supporters to learn more about the struggle to save the Asian Elephant. Read their story in the May issue of Suffolk magazine

Wild Elephants in Nagarhole National Park. This group of elephants is protected in one of the last intact fragments of forest in Tamil Nadu, southern India. Photo © David Bebber

World Land Trust (WLT) supporters, Peter Baker and Sue Seabon, recently visited an Elephant corridor in India’s south-western state of Kerala. The Wildlife Trust of India, in partnership with the World Land Trust, is working to turn Elephant’s traditional migration paths into protected wildlife corridors, allowing the animals to move safely from one protected forest to another. For generations, Elephants in India have been using the same routes as they migrate long distances in search of food, yet the escalating rise in human population and spiralling development means that people are making settlements within these traditional migration paths. This is causing increased conflict between people and Elephants – the animals trample crops and destroy livelihoods, are a threat to housing and, and all too often, cause loss of life. To tackle this escalating crisis the Wildlife Trust of India and WLT are building new villages to voluntarily move people out of harm’s way. During their two day visit to the Elephant corridor, Peter and Sue saw first-hand how this was being achieved when they met the villagers of Pullyankolly, the third village out of five in the area to be relocated. Peter said:

“This was a particularly poor tribal village in the Elephant corridor. It was only a five minute walk on a forest path from the nearest road, but it had a real feel of isolation and deprivation. The villagers showed us where Elephants had been in their vegetable and banana patches just the night before. The animals had wreaked havoc, the crops had been trampled and banana trees broken.”

A family proudly stands outside their new home in Kerela. Photo © Marie Chambers

Soon these villagers will no longer need to worry about the devastation caused by the Elephants or the threat they pose their family, as they will move into the new houses being built just a few kilometres away in the same river valley but away from Elephants. This project is nearing completion, while the aim is to eventually secure 88 small corridors of land, giving India’s impressive animals enough space to survive. Supporters of the World Land Trust, like Sue and Peter, have already helped with this vital work by donating to the Indian Elephant Corridors Appeal, which has funded the protection of two corridors.