The World Land Trust (WLT)'s partner provides a safe haven for this migratory warbler, as it faces threats in both its summer breeding ground and wintering habitat In February WLT received the good news that world-renowned ornithologist, Robert Ridgely, and Nigel Simpson (who co-founded our partner organisation Fundación EcoMinga), together with Francisco (Pancho) Sornoza,  spotted three male Cerulean Warblers in EcoMinga’s Rio Anzu reserve, in central Ecuador. This was an occasion for great rejoicing as the sighting of these three individuals bodes well for their survival in this protected habitat.

From April to September, the Cerulean Warbler (Dendroica cerulea) builds its nests in the mature forests of eastern North America, raising its young before migrating across the Gulf of Mexico to over-winter in South America. Life is rather tenuous for this little warbler as neither its summer nor winter grounds are protected from habitat destruction.  Due to loss of its habitat to the spread of agriculture, mining and urban development, the Cerulean Warbler is considered to be the fastest declining neotropical songbird and is listed as Vulnerable by IUCN Red List of Threatened Species. The Cerulean Warbler, named for its blue shades of colouring, breeds in the mountainous regions of North America where its habitat is being lost largely to the coal mining industry. The dramatic reduction in the area’s forest cover has a serious effect on its numbers as it is home to the highest density of breeding Cerulean Warbler. Brown-headed Cowbirds are also a problem as they frequently parasitise Cerulean Warbler nests. Like the cuckoo, cowbirds lay their eggs in other birds’ nests which reduces the survival rate of their chicks. The cowbird eggs hatch before Cerulean eggs and unhatched warbler eggs are often pushed out of the nest. As the Cerulean Warbler flies south for winter, it meets further habitat destruction of forests in Venezuela, Colombia, Ecuador and Peru. The forest cover on these Andean slopes is rapidly disappearing as the land is cleared to make way for agriculture, mostly to graze cattle or grow coffee.

Hope for the Cerulean Warbler in Ecuador

Coffee growing has not always been a threat to the Cerulean Warbler; in fact shade-grown coffee plantations, where shorter coffee plants are shaded by taller crops, were once a haven for these birds as they create the perfect environment for the warbler to forage for insects in the canopy. Unfortunately the escalating global demand for coffee has seen shade-coffee plantations throughout South America being replaced by more intensive coffee crops that need greater exposure to sunlight, no longer providing the right conditions for the warbler. WLT’s Ecuadorian partner Fundación EcoMinga is working to directly address this problem and is in the early stages of developing a shade-grown coffee project with the local community. A small experimental coffee seed nursery has been established on the Cerro Candelaria Reserve, just west of the Rio Anzu Reserve where the Cerulean Warbler was spotted. It is hoped that this project will not only provide an income for the local community, but will also create a suitable protected habitat in which the rare Cerulean Warbler can thrive.

More information about the Cerulean Warbler and its habitat 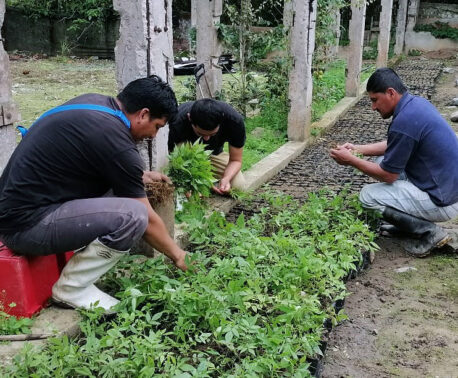