The World Land Trust is funding more reserve rangers in Ecuador to protect threatened habitat and wildlife through the new Keepers of the Wild appeal.

he first two rangers in Ecuador to be sponsored by the World Land Trust’s (WLT) new ‘Keepers of the Wild’ appeal are Galo Vélez from the northeast of the country and José Acaro from the southwest. This appeal directly supports on-the-ground conservation work in the wildlife reserves we are helping to protect and it costs on average just £5,000 to keep a ranger in the field for one year.

Galo Vélez installs a camera trap;  one of his many roles as a reserve ranger. Photo © Fundación Jocotoco.

Stop the destruction of Choco forest with head ranger Galo

An excellent leader, 53-year old Galo is head ranger at the Río Canandé Reserve in north-west Ecuador owned by our partners, Fundación Jocotoco. The reserve is in an area of important lowland Choco forest that is rich in endemic species. Galo’s role is to assist the reserve administrator and coordinate on-site conservation activities.

Living locally with his wife and three children, Galo is head of a local community group and well-known in the surrounding area. This is of real benefit to Fundación Jocotoco as they continue to build strong relationships with communities and encourage local people to become actively involved in their work. This is the best way of securing the long-term sustainability of their project. 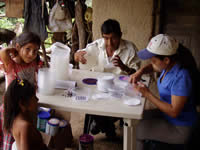 José has worked for our partners, Nature and Culture International (NCI) since 2002, having grown-up in rural south-west Ecuador near NCI’s Laipuna Reserve.

Laipuna reserve is a flagship project for NCI; this previously threatened area protects one of the best remnants of Tumbesian dry forest left in the world, and boasts a rich biodiversity with many endemic species. NCI works closely with local communities to promote conservation and sustainable use of resources.

José has a key role working with the neighboring community of Numbiaranga; he is well-respected and has built up an excellent relationship with the local people, successfully working with them in a number of conservation and social activities. This contributes to NCI’s goal of convincing local people that they should not only protect the Laipuna Reserve itself, but also conserve areas beyond the reserve’s boundaries.

After nearly a decade of working with NCI, 37-year-old José is now very well-trained and an important member of staff; our partners say, “over the years José has developed outstanding leadership skills and is committed to the conservation of the area’s unique wildlife habitat.”

All of our sponsored rangers will regularly send updates to WLT about their adventures as ‘Keepers of the Wild’. Their experience of on-the-ground conservation work, in some of the most spectacular areas of the world, will be published on the WLT website soon.

Read more about the Keepers of the Wild »