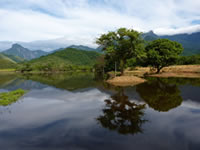 The wetlands at REGUA. Fortunately the reserve was not affected by recent flooding in Brazil. Photo © Alan Martin

Fatal floods in the south-east of Brazil have been responsible for the loss of more than 640 people, leaving many more thousands trapped by the landslides. This was a great personal concern to the World Land Trust (WLT) as the reserve that our funds have helped purchase and protect at REGUA (Reserva Ecológica de Guapiaçu) is very close to the destruction that hit areas north of Rio de Janeiro. Thankfully everyone who works at REGUA is safe and the reserve itself was not affected by the mudslides. Nicholas Locke, Director at REGUA, describes the devastation that he witnessed in the nearby city of Nova Friburgo, one of the worst hit areas. He said:

“Nova Friburgo, where we once lived and often travel through on our way to birding sites, has seen massive mud and earth slides – they have completely covered cars, crumpled houses, torn bridges and roads. There are rivers of tsunami proportions passing through these areas, with a tremendous loss of life.”

At least 294 people have died in Nova Friburgo and many more have been left homeless. REGUA is donating a lorry load of bottled water to the local communities and Nicholas said that there has been huge solidarity between the people.

Illegal construction and disrespect for the environment

“The speed at which houses are built in what are called “irregular sites” defies all of Brazil’s municipal and state planning departments”, he said. “The increasing demand for building sites – with their disrespect for environmental laws and the cost cutting in building materials – is coupled with the government’s incapacity to control urban expansion, their backlog of routine inspections, their limited staff, and an all too well known tardiness in judicial action.  This has all cumulated to produce an extensive history of landslide disasters over the last 50 years. Our growing knowledge of climatic change only furthers our concern for those living in precarious conditions.”

Nicholas added: “You always see these tragedies on TV and they seem far removed, but when you see it in real life the enormity of our own fragile existence and the stupid things we are doing to the environment hit home.”