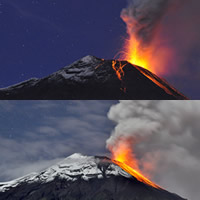 The World Land Trust (WLT) is always delighted to receive photographs from our project partners across the world, capturing the wildlife and habitat we are helping to protect. The latest images are from Fundación EcoMinga, an Ecuadorian partner

These breathtaking shots are a threatening reminder of the Tungurahua Volcano’s power; it is one of Ecuador's most active volcanoes and has become dramatically explosive this month, forcing part of the population around its base to evacuate their homes.  Stretching over 5,000 meters high, Tungurahua is just 85 miles south-east of the capital Quito. The photograph was taken by Lou Jost, of WLT’s project partner Fundación EcoMinga, outside his house. Although some of the ash has reached EcoMinga’s reserves, he assures us that it is not enough to cause problems.  Lou does not seem overly perturbed, commenting:

"The volcano has been erupting very dramatically lately. Now that I live on its flanks I have a ringside seat."

A rare close-up shot of a Linné's Two-toed Sloth (Choloepus didactylus) in its rainforest canopy habitat. Sloths are usually solitary although females do sometimes form groups. They spend almost their entire life hanging upside down from trees – eating, sleeping, mating and even giving birth upside down. This sloth was found in the Rio Zunac reserve, in central Ecuador, which is owned by Fundación EcoMinga and funded by WLT. With his basic point-and-shoot camera, Head Ranger on the reserve Luis Recalde climbed a tree to get this close-up and the sloth seemed more than happy to pose for the photo.

A rare glimpse of the Black-and-chestnut Eagle (Spizaetus isidori) was also photographed by Head Ranger Luis, in the Rio Zunac reserve. This South American bird of prey is found in humid montane forests in the Andes, from northern Argentina, through Bolivia, Peru, Ecuador, Colombia, to Venezuela. It is classed as Vulnerable by IUCN Red List and its populations are continuing to decline due to loss of nesting sites through habitat destruction. 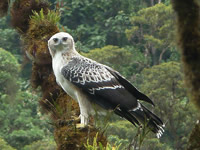 Despite its large size, it is hard to spot and little studied because it occurs in such remote and rugged mountain areas. This is the second time that Luis has been lucky enough to photograph the species, previously on EcoMinga’s Cerro Candelaria Reserve. Luis has become an accomplished wildlife photographer and earlier this year photographed animal behaviour that was new to science, an image of a Caecilian attempting to eat a giant earthworm that was published in BBC Wildlife Magazine.