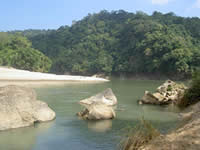 The Karnataka Forest Department in India recently announced a plan to purchase a large section of privately owned land, which will secure wildlife corridors for elephants in this south Indian state.

The river Simsang in the Siju-Rewak Corridor in NE India which WLT helped to secure. This is one of the few stretches of river where the banks are shallow enough for elephants to cross.

This unprecedented decision was almost certainly made as a response to international concern regarding threats to Asian Elephants, particularly as demonstrated through the corridor projects underway between World Land Trust (WLT) and project partner the Wildlife Trust of India (WTI). The forest department aims to purchase land near the Bannerghatta National Park to provide safe passage for elephants to this protected region.  At the end of 2009 the Edayarhalli–Doddasampige corridor, secured by WTI in partnership with the International Fund for Animal Welfare (IFAW), was formally handed over to the Karnataka forest department for permanent protection.  The fact that the government has initiated land purchase directly is testament to the influence NGOs such as WTI and WLT have on the Government.  WTI has previously protected two elephant corridors in the states of Meghalaya and Kerala with funds provided by WLT. Land in the Kerala corridor is due to be handed over for the forest department’s protection this December.

A family who chose to be relocated outside the Kerala elephant corridor. This image shows them outside their new house and they are happy to be away from the threat of elephants and damage to their crops.

The Karnataka project will follow a similar model used by WTI, which involves the purchase of privately owned land and voluntary relocation of settlements within elephant-human conflict zones. This is becoming increasingly important in areas where elephants regularly destroy crops and property and come into increasing conflict with humans.  The Karnataka project is ambitious, and requires the purchase of four different corridors requiring substantial funding. However, direct Governmental involvement is a positive step forward for the future of Asian Elephants in India.