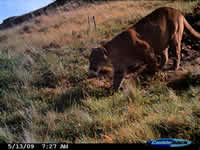 Roberto Pedraza, Technical Officer of Grupo Ecológica Sierra Gorda (GESG), WLT’s partner in Mexico, uses camera traps regularly and has captured some amazing moments on camera and discovered useful information about the reserve in which he works. “We have new records of habitats you might never have expected to record a species: for instance Pacas (large rodents similar to Capybaras) above 2000m in a cold cloud forest, which would not be expected, as well as Ocelots!”

Used by many of our partner organisations, camera traps provide an excellent way to capture wildlife on film and are a useful tool for carrying out research and subsequently conservation. They can provide information on species distribution and population density, which ultimately can help conservationists prioritise areas in need of protection.

Roberto explains that the importance of camera trap use now extends beyond research. “Although research was their primary purpose, the images have become powerful tools for education and advertising in the Sierra Gorda Biosphere Reserve (SGBR).” GESG carries out educational programmes and works alongside the local community. Using these images is a great way to educate the community about wildlife on their doorstep and the reserve’s importance for their protection.

Capturing species on camera is an art in itself and Roberto is well practiced at choosing a location for a trap “I’m fortunate enough to really know the SGBR well, its wilderness areas and which are favoured by the big cats. So based on that, and reports from local people, I choose where to place the cameras. But it’s a tricky thing where exactly to place a camera.  Pumas and jaguars use large areas of forest to roam and if you have a limited number of cameras you have to make the right choice. Fresh water and ponds, fresh tracks, territorial marks or cattle kills help to choose a new camera site.”

The results of Roberto’s work show the immediacy of the moment and the beauty of the wildlife. He has two particular favourites: “One is of a Jaguar smelling a camera, obviously attracted by our human scent, and the second one of a big puma male, who passed just two hours before me, it was almost an encounter!”

World Land Trust (WLT) multimedia consultant, Luciano Breves, who lives in Brazil and manages our webcams on the REGUA and …