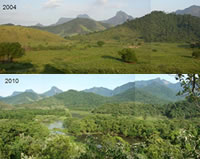 World Land Trust (WLT) has supported tree planting activities at REGUA (Reserva Ecologica De Guapi Assu), Brazil since 2004 and a recent report indicates that, to date, an impressive 60,000 trees have been planted on the reserve.

Above: The photograph in 2004 shows cattle grazing hillsides before reforestation began in 2004. Below: In 2010 the hillsides have been reforested and the wetlands recreated at REGUA. Photo © REGUA

There is an ongoing programme to restore the critically endangered lowland Atlantic Rainforest. A fundamental aim of this is to increase biodiversity, and since 2004 a spectacular increase in bird species, from 50 to 200, has been reported. In particular, the Black legged Dacnis, a species endemic to the Atlantic Rainforest, not been seen for many years, is now regularly spotted at REGUA.

The restored wetland habitat is also a success story in terms of increased biodiversity. It has been colonised by an impressive range of plants and aquatic species, including significant increases in Capybara and Caiman. This is in stark contrast to 2003, before work began, when the land was primarily used for grazing livestock and of little biodiversity value.

REGUA offers opportunities for research, attracts nature tourists and visitors from among the local communities. It also protects the Guapiaçu watershed, and reduces threats from grassland fires, as well as enhancing the natural beauty of the area.

REGUA’s expertise in reforestation was also recognised in 2009, when they were requested by Brazilian NGO SOS Mata Atlântica to become involved in planting 20,000 trees on one of their properties.

WLT continues to support tree planting at REGUA and is funding the planting of an additional 10,000 trees during the 2010-2011 season. Without doubt the restoration has been a huge success for the reserve.

Find out more about WLT’s work with REGUA »