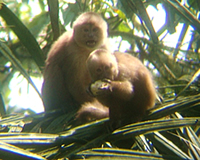 Two suitable reintroduction sites for the White-fronted Capuchin Monkey (Cebus albifrons aequatorialis) have been identified on the Buenaventura Reserve in southern Ecuador. Capuchins were last spotted in the area that is now World Land Trust (WLT) partner Fundación Jocotoco's Buenaventura Reserve, 25 years ago.

Over recent months Francisco Sornoza, Fundación Jocotoco’s Director of Conservation, and researcher Wilmer Quimíz, have been investigating the potential for reintroducing White-fronted Capuchin Monkeys in the Buenaventura cloud forest reserve. During their investigations, Wilmer found a population of 14 Capuchin Monkeys 35 kilometers south of a reserve in the Aguacatillo Sector, in a forest fragment at the same elevation as Buenaventura. The similarity of this habitat with Buenaventura’s makes Buenaventura a perfect location for the species’ reintroduction. White-fronted Capuchins are endemic to humid, dry tropical and subtropical forests west of the Andes in Ecuador. The research team believes that the group found during the investigation may be the only population still surviving in the high altitude area of El Oro Province and views the reintroduction of the species into Buenaventura as an important step towards the long term survival of the species. The aim of this reintroduction project is to release the offspring of captive capuchins. The young will be reared with no human contact to prevent imprinting and to ensure that they have the best possible chances of surviving in the wild. Initially adults will be released into a large purpose built enclosure in the forest at Buenaventura – after vet screening for disease and suitable temperament.

Learn more about the incredible wildlife in the Ecuadorian forests, including the El Oro Parakeet, on the Buenaventura Reserve page. You can also view birds and other wildlife at Buenaventura in real time thanks to WLT’s Webcam in the Forest.